About:
The Strange Case of Dr. Jekyll & Mr. Hyde by Robert Louis Stevenson is a novella written by the Scottish born author. The 1886 work is considered a classic of British literature. 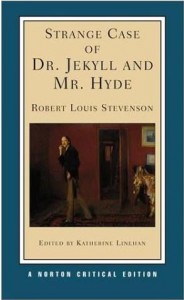 Thoughts:
The Strange Case of Dr. Jekyll & Mr. Hyde by Robert Louis Stevenson is a well known novella which deals with split personality.

I found it interesting that the book has only two settings, letters and laboratory. Not the clean, sterile laboratory we imagine, but a disgusting, dirty and bloody one which implores the reader to feel the Gothic horror which the author wishes to convey. In this environment is where Mister Hyde is created, a troubled figure, mean and unabated.

Mister Hyde is what Dr. Jekyll wants to be but suppresses within himself. Hyde yearns for violence and sexuality, he is full of strength, uncaring and out of control – or is he actually in full control?
Mr. Hyde celebrates the nature of men unhindered by social norms, rules or laws while Dr. Jekyll self censors himself as a proper gentleman should in Victorian England.

As time goes on, this novella could be read in several ways. There is the most known one, that of split personality, but also could be a pathological angle of investigating the nature of mental illness.  In these days, where science, technology and medicine is much more advanced, the story could also be read as a warning on the extreme use of mind altering chemicals, drugs or alcohol and the self destructive properties of such actions.

But Dr. Jekyll & Mr. Hyde could also be read as a philosophy book which deals with the knowledge that we are all on death’s door. Death, in this case, is represented as a man of flesh and blood. A psychoanalyst could also, somewhat justifiably, could read the story as the psychotic and narcissist fantasy of Dr. Jekyll.

I found the book’s subject disturbing, not because of the murder or Goth involved, but more on a psychological level. The possibility of every individual leading a double life is a scary thought, especially when it comes to loved ones. How often, when a grotesque murder occurs, we hear the almost laughable lines “he was such a nice guy” or “she was a wonderful mother”?

Another side of the story, and I say that as a fan of Mr. Stevenson’s work since an early age, I can certainly see a pattern of commentary on Victorian England where, as is today, a person’s wealth and social standing relieves them of any moral obligations towards their fellow men or women.

So tell me, can rich people still get away, literally and figuratively, with murder?

Synopsis:
Prosecutor Gabriel John Utterson has taken certain interest in Mr. Edward Hyde even since he trampled a little girl. The crowd gathered forced Mr. Hyde to make retribution, however the check he gave the girl was signed by Dr. Henry Jekyll.

Mr. Utterson also discovers that Mr. Hyde is the sole beneficiary of all of Dr. Jekyll’s wealth. Utterson tries to discuss the matter of Mr. Hyde with the good doctor which, as one might guess, doesn’t yield any results.

A year later a member of the British Parliament is murdered and the maid identifies Mr. Hyde. Utterson confronts Dr. Jekyll who shows the lawyer a letter in which Mr. Hyde states that he is will disappear forever.

Zohar – Man of la Book
Disclaimer: I got this book for free.
Article first published as Book Review: The Strange Case of Dr. Jekyll & Mr. Hyde by Robert Louis Stevenson on Blogcritics.

BOOK BLOGGERS – Have you read The Strange Case of Dr. Jekyll & Mr. Hyde? If so link up your review below: