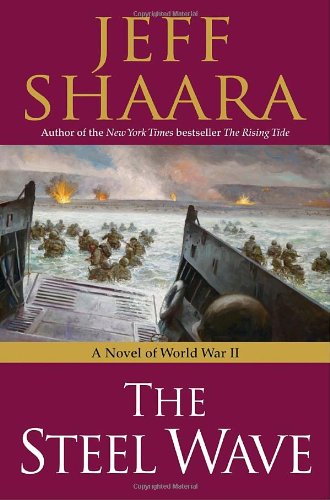 My rating for The Steel Wave – 4

About:
The Steel Wave: A Novel of World War II by Jeff Shaara (web­site) is a his­tor­i­cal fic­tion book which blends his­tor­i­cal char­ac­ters, fact and fic­tion into a read­able story. The book is the second of a series about World War II.

Thoughts:
The Steel Wave: A Novel of World War II by Jeff Shaara is the second book of a trilogy by the author, the first being “The Rising Tide” (book review) of this historical fiction series. The topic for this book is the events leading up and after D-Day (January through September 1944) seeing through the eyes of the aggressor (Eisenhower), the defender (Rommel), the generals (Bradley, Patton, von Rundstedt) and best of all, the ordinary soldiers (Sergeant Jesse Adams, a paratrooper of the 82nd Airborne and Jack Logan, a tank gunner with the First Armored Division).

The beauty of these books is the way the author weaves the contrasting day-to-day activities of the people he writes about, how he gets into their mindsets and “dares” guessing what they were thinking through huge amounts of research.

Another interesting aspect of this book is how Mr. Shaara explores the political struggles that pulled at both sides. Eisenhower by trying to control his generals as well as appease politicians, while Rommel is trying to get Hitler to defend the whole coast of France while trying to remove himself from being implicated in the failed assassination attempt on the Fuhrer.

You don’t have to be a history buff to love this book, this character driven story allows the story to unfold from many perspectives. Mr. Shaara did a tremendous amount of research to tap into the hidden thoughts of commanders and generals alike. The story seamlessly transitions between the men on the ground to the high echelons of power where their future will be decided.

In the book, Chief of Staff General George C. Marshall tells Ike: “‘Newspapers are a great place for cowards and malcontents to have their say.'”
So tell me, do you think General Marchall’s statement is still true?

Synopsis:
The book starts off where its predecessor left off January 1944, five months before D-Day. A bunch of British commandos are picking up soil samples from Omaha Beach before the brutal Allied invasion starts.

Switching from character to character telling about either the same event or a day or two later, the story progresses through the invasion ending in October 1944.

BOOK BLOGGERS – Have you read “The Steel Wave”? If so link up your review below: