Civil War by Mark Millar (illustrated by Steve McNiven) is a comic book event which pitted a team led by Captain America against a team led by Iron Man (Tony Stark) at great cost to both. This graphic novel was adapted to the 2016 motion picture Captain America: Civil War from Marvel Studios. 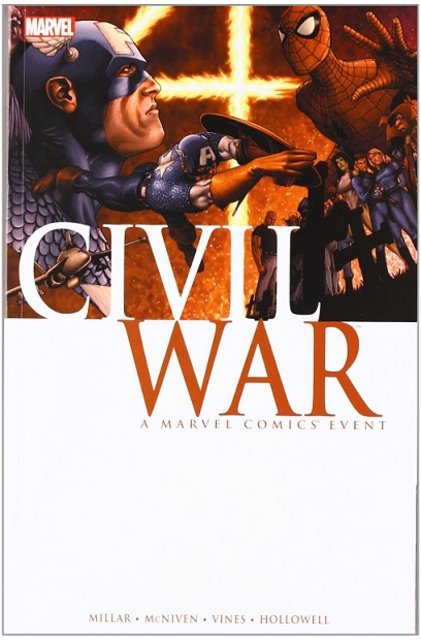 Every once in a while, more often then we’d like to think, both Marvel and DC Comics create an event which will “change the universe”, for once they were right. At the time, Civil War by Mark Millar (illustrated by Steve McNiven) was savagely hated by Marvel fans, but I really enjoy stories which look at iconic symbols, fictional or not, from a more realistic angle.

The story is written in a way which makes you realize that sometimes it’s not a simple question of wrong vs. rights, but that people on opposite sides have valid viewpoints – much like in real life. It’s not difficult to believe that if masked super people started bashing criminals but causing much collateral damage, in both life and infrastructure, the public would be enraged.

I have only complaints, a small one and one that’s a big bigger. The small complaint is that some of these characters, Captain America especially, are really out of characters. The bigger one is that the ending was lackluster at best.

Even though I didn’t know, or never followed, the majority of the characters in this graphic novel, I was able to follow the story pretty well. My understanding is that in order to get the full picture one has to read the other Civil War volumes, which I’m certainly willing to do. Apparently there are two suggested reading orders, one by Marvel Comics and one suggested by howtoread.com scrolling about two thirds to the bottom of the page will give you the trade paper backs order), apparently this graphic novel is eighth on the list.

As public opinion turns against super humans (villains or otherwise) mainly due to a group called the New Warriors which causes a lot of damage filming reality shows. Hindsight, who wants nothing to do with the bad publicity, release their secret identity which causes attacks by civilians on the heroes.

Congress, with the guidance of Tony Stark, passes the Superhuman Registration Act to force all those with superhuman abilities to register with the US government. Captain America refuses to join the S.HI.E.L.D. team that is tasked with hunting down those who violet the act. Calling themselves the Secret Avengers, Cap is joined by Hercules, Falcon, Daredevil (Danny Rand acting in place of Matt Murdock, Luke Cage, and the Young Avengers.

The government backed heroes led by Iron Man include Reed Richards, Henry Pym, Spiderman, and She-Hulk. The government tracks down the Secret Avengers, set a trap for them, and a battle begins which will start a war between the former friends.

Zohar — Man of la Book
Dis­claimer: I got borrowed book from the local library.
*Ama­zon links point to an affil­i­ate account