About:
Batwoman Volume 6: The Unknowns by Marc Andreyko (Illustrated by Jeremy Haun) is the conclusion to the New 52 run of the Batwoman story. This graphic novel collects issues #35 – #40, Batwoman Annual #1 as well as Batwoman: Future End #1). 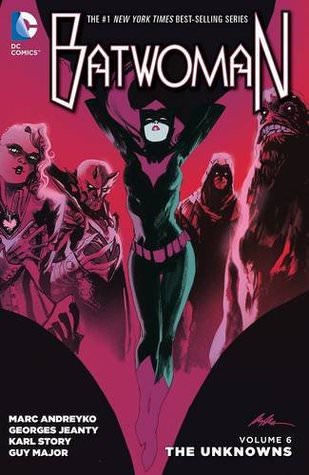 Thoughts:
I was really rooting for this graphic novel. The Batmwoman saga which started in a high note needed to end in a magnificent fashion, setting up the series for future years.

Instead, my only thought after finishing to read Batwoman Vol. 6: The Unknowns by Marc Andreyko (Illustrated by Jeremy Haun) was “what the hell was that?”

There was a big hullabaloo a while ago when DC Comics kiboshed the marriage of Kate Kane (Batwoman) and Detective Maggie Sawyer, I haven’t really paid attention to why. Was it an editorial decision or, as many speculated, against the morals of the Christian writer.
Whatever it was, the decision was bad and the way it was done grinded the story to a halt.

The Unknowns are a strange team up, which frankly I enjoyed. Clayface was my new favorite, and The Demon Etrigan is always fun to read. I don’t believe that Batwoman needed a team though, I enjoyed it much more when she was played off as being on the fringes of the Bat family, working alongside them but not with them.

Seems to me like the team tried to take on too much with this graphic novel. Batwoman is a fairly new character and we are still learning about her, but now we introduce three new heroes, Alice Kane making a comeback, as well as two villains. The strength of the first four books was the characterization, and I would have liked to read more about the sisters re-uniting.

This graphic novel is not all bad, there are some good jokes here and there. I especially commend the team for taking some fun risks (Batwoman in space), maybe not all of them worked out but getting out of the comfort zone is something I appreciate (a gay wedding maybe?).

The art was OK, not bad but I did not like the way Batwoman was drawn. Seems like the artist got his inspiration from the Batgirl comics or TV shows and drawn Kate Kane like a 16 year old girl playing dress up instead of a strong, mature, kickass woman that she was in the beginning of the storyline.

I didn’t get the ending at all.
Batwoman becoming a vampire?
The issue lost me there.

Synopsis:
The Unknowns are a group of anti-heroes fighting together. The group includes Clayface, Ragman, Etrigan the Demon and, of course, Batwoman.

The Unknowns have a challenge in front of them, the evil witch Morgan Le Fay, destroyer of Camelot now hell bent on destroying Gotham.