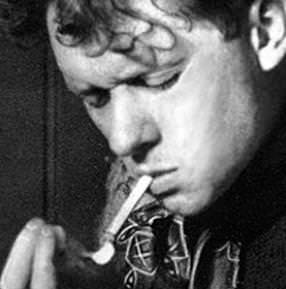 1)      Born in Swansea, Wales as Dylan Marlais Thomas, he was an average student until the age of 16, when he left school to become a journalist.

2)      The poet’s father was an teacher and called his son Dylan after the character Dylan ail Don, a character in The Mabinogion (12th – 13th century prose stories written in Middle Welsh).

4)      He published many of his works while still in his teens. In 1934, the publication of “Light breaks where no sun shines” granted him literary attention.

5)      Dylan Thomas married Caitlin Macnamara in 1937. Their relationship, defined and fueled by alcoholism, was mutually destructive.

6)      Mr. Thomas was not able to join the British Army during World War II due to health issues., he fought to be classified as “grade III”, meaning he’ll be of the last ones to be called for service. He did however write scripts for the BBC helping the war effort.

7)      Even though he was a popular poet during his life time, Mr. Thomas found it difficult to make a living as a writer and supplemented his income with radio appearances and reading tours.

8)      In the 1950s, after gaining a certain amount of fame from his readings, Mr. Thomas traveled to the United States.

9)      During his time in the US, his behavior and drinking worsened and, as one might expect, created a legend.