“Washington: A Life” by Ron Chernow is an encompassing biography of George Washington.  This  marvelous book breaks the wooden image of Washington and brings out the character of the man we all learned about with all his charm and personality. 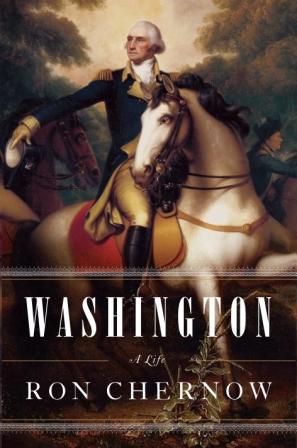 My rating for Washington: A Life – 5
Do your patriotic duty.  Buy the book here*
More Books by Ron Chernow*

This is the kind of history book I love.  Mr. Chernow tells of little known anecdotes about George Washington which not only tell of of his character, but even relevant to this day.  Some of the stories the author  relates are laugh-out funny, the type that no-one can make up, the type that if you read them in a fictional book you’d hiss and throw the book at the wall – yet they are true.

The self criticism of Washington literally leaps out of this book, that is the major difference I found between this biography and “His Excellency” (book review).  Washington always internalized new things he learns and is able to change even though it goes against everything he knew to be true.  One can see how over a lifetime of slave ownership his views towards this practice have changed from one end to the other.

Ron Chernow is not only a wonderful historian, but also a masterful story teller.  In this book Chernow painted  George Washington in a relatable, unforgettable realism while keeping the story is vivid,  flowing and compelling.  Why, it’s almost like you’re reading fiction instead of a biography.
Then again, I always maintained that no fiction story can be as good as history, otherwise it would almost be laughable.
“Who makes up this stuff“, we would cry to the heavens.

Which author in their right mind would invent a character like Mary Ball Washington, George’s mother.   Poor George couldn’t earn a word of praise from his emotionally numb  mother, not as a loyal son, general, president or benefactor.  Not only that, Mrs. Washington petitioned the Virginia legislature for a pension… and she was rich!
Laughable – if in fiction.

On an off shoot, while the book is about George Washington, I loved how Mr. Chernow peppered the narrative with a few sharp witted quotes from John Adams (review of “John Adams” by David McCullough) – funny today as they were when written.

I have read many history books, several about Washington and I must put this one on the top of the list, the extraordinary quality of the writing and the psychological insights are worth the price of admission by themselves.

“Washington: A Life” is divided into six parts:

The Frontiersman:
starts with a quick history of the Washington family all the way to the time young George left the British Army for the life of a happily married Virginia planter.  Along the way the readers learn how “George” became “Washington” through his trials and tribulations in the French-Indian War as well as the hard lessons he learned from being a second class citizen to his British born counterparts.

The experience young Washington gained in these early conflicts were invaluable to his belief in a strong central government (he couldn’t get troops to protect the frontier from other states), no to mention his disdain for short sighted politicians.

The Planter:
After giving up his military Washington marries the wealthy widow Martha Custis and settles into domestic bliss as a Virginian gentleman-farmer.  However, financial trouble and family tragedy destroy this illusion, coupled with yet more embarrassment from England as well as restrictive laws and unfair judgments against the colonials.  The formerly loyal English subject has committed himself to the  revolution which will make him world famous.

The General:
Taking control of a non-existent Continental Army, Washington’s greatest accomplishment was keeping it together.  During the though eight years of the Revolutionary War the only constant was Washington who had to hone his military skills as long with his political skills “dealing with selfish, apathetic, states and bureaucratic incompetence“.
By stepping down, returning his commission and going back to his farm Washington became, according to King George III”the greatest man in the world“.

The Statesman:
Touches on the years between the end of the Revolutionary War and the time Washington was unanimously elected to be president.  As much as Washington wished to remain in Mount  Vernon, he adhered the call of Congress and helped get the Constitution accepted by nine of the original 13 states in order to create a union.

The President:
Washing was put into another public job, Washington grudgingly accept and leaves Mount Vernon, again, to the temporary capital city of New York.  Realizing that everything he does not only sets a precedence, but will also be scrutinized for ages, Washington forges and defines the unique role of the President & the Executive branch.

The Legend:
Spending the twilight of his years in Mount Vernon Washington was still plagued with financial worries.  As much as Washington wanted to get away from the political theatre, the theatre still found him especially during the “Quasi-War” with France during John Adams’ tenure.  George Washington died after exposing himself to the elements and falling ill.

Even if you don’t read all 900 pages, you should buy this book – it looks good on the shelf*
More Books by Ron Chernow*

Washington: A Life by Ron Chernow