Post firs published as Guest Review From Man Of La Book: “The Intimate Lives of the Founding Fathers” by Thomas Fleming on http://twofistedreader.com

About:
The Intimate Lives of the Founding Fathers by Thomas Fleming is a history book which tells about the lives of six famous men from the perspective of their relationship with the women in their lives. I do love books which tells us more history from the “trenches”, after all, there are very few big events which aren’t made of small, personal moments. 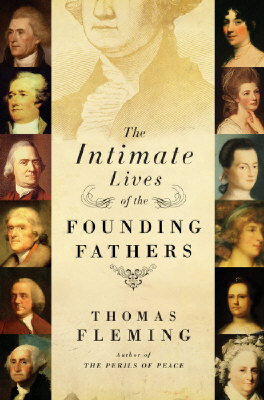 Thoughts:
The Intimate Lives of the Founding Fathers by Thomas Fleming is what one might call “history light”. While there was no new information revealed in the book, it is a wonderful introduction to more serious works which deal with the Founding Fathers, their policies and how the relationships with other influenced their work (which still has ramifications to this day) and their policies.

Mr. Fleming does not view the Founding Fathers as untouchable historical figures, but as men of flesh and blood who lived, loved, laughed, hurt and gotten hurt. The author’s research is excellent and his writing style is enjoyable.

Those who only learned about these six giants of American politics in school are bound to get a bit of shock. George Washington had a crush on this neighbor’s wife, Alexander Hamilton committed flat out adultery, Benjamin Franklin had a child out of wedlock and left his wife to frolic in Paris.

While the men of this book are in the title, the real stars are the women, especially Abigail Adams and Dolley Madison. These two formidable women seemed to have an equal marital relationship in today’s standards. Both James Madison and John Adams relied on their wives for strength and advice. The letter exchange between John and Abigail Adams shows a remarkable woman who could hold her own in deep philosophical and political discussion with her husband and a match to his wit which is only recently began to be appreciated. Mr. Fleming calls those two first ladies “Presidentresses”, a term which some might use (mostly not in a complimentary fashion) to other first ladies who seemed to call the shots behind the scenes (Edith Wilson, Eleanor Roosevelt and more recently Hillary Clinton).

A whole section is dedicated to the tiresome subject of Thomas Jefferson’s relationship with his slave Sally Hemings. The author seems to think that the affair never happened, he might be right as he bring forth very convincing, well researched reasons as to why (regardless of the recent plethora of soap-opera type TV hype). However, I find myself amused by argument for either side in this affair. First, I simply don’t care about an affair which a happened 250 years ago, second I’m more interested in what the affair might or might not mean in the grand scheme of things.

The Intimate Lives of the Founding Fathers is a fascinating glimpse into the private lives of these famous Americans. The personal tidbits are, for me, what makes history come alive from the past.