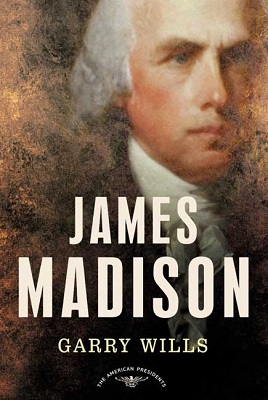 James Madison was a great theorist, extraordinary writer, cunning politician and an effective legislator – but as president he was simply “good”.  Madison was never counted as one of the great presidents and author Garry Wills acknowledges as such in the opening of the book.  As a matter of a complete biography this approach, in my mind, is the opposite of what it should be.  Wills points this out and follows with a clear, clean and interesting biography focusing on Madison’s administration.

Wills hits the highlights and low lights of Madison’s time in office.  The author lauds the president for trying extremely hard, and succeeding, in not to abusing the Constitution during the War of 1812 (something which could not be said for his successors such as Lincoln, Franklin Roosevelt and others) but balances those with such behavior as Madison’s quixotic paranoia about such people as Alexander Hamilton.

James Madison, even though short, is written in an academic style.  Information is being sent at the reader fast as if you were reading a textbook – just data without the spicy anecdotes which make a biography worth reading.  I still don’t feel I know Madison’s personality or what, if anything, did the lively Dolly Madison saw in him (besides some rich guy from Virginia).  I’d rather read the long, more paced biographies that give me a complete picture of the person.Please leave a comment if you agree or disagree with my review, or just to say hello.