The House of the Seven Gables by Nathaniel Hawthorne is a romance gothic novel published in the 1850s. Mr. Hawthorne was an American writer and novelist from Salem, MA, know for such classics as The Scarlet Letter. 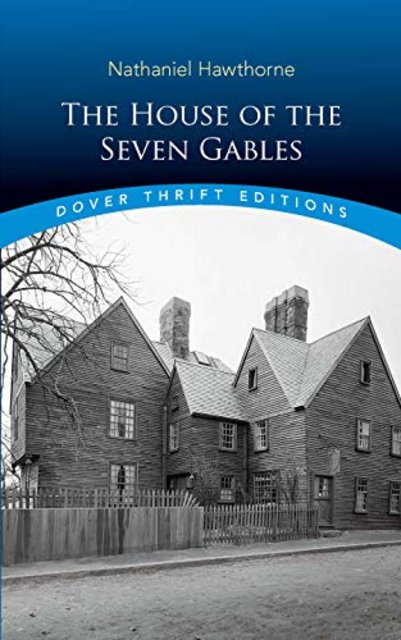 I bought this book in preparation for an upcoming trip, The House of the Seven Gables still stands in Salem, MA and we were planning a visit.

This is the first book I’ve read by Nathaniel Hawthorne, and honestly, it might be the last. This short book was, for me, very difficult to read and follow. There are detailed descriptions of anything and everything, from some random item in Hepzibah’s shop, to flowers on the roof. I was waiting for something to start happening, but it was almost half the book before something finally did.

I was hoping that the first 100, or so, pages wouldn’t be a waste. However, with the exception of me becoming an expert in the Pyncheon’s family tree, as well as well versed in the history of the house, not much of importance or relevance to the story has been revealed. In fact, for relevance a few pages, at the most, might have sufficed.

Finally, the story picks up, but we are in for more commentary because… 1800th century literature, I guess. The idea that the sins of one generation will live on to the ones after it is not new, and from other readings, I realize that’s what people of the time expect, and rejoiced, around dark themes.

Mr. Hawthorne, however, takes it too far and spends most of the book searching for a plot. The ending is almost painful in its attempts to quickly tie up any loose ends.

That being said, there are sparks of genius sprinkled around the novel. I certainly enjoyed Hawthorne’s characterizations. The description of all the main characters, their power, and obsessions. Hawthorne, whose relative was a judge at the Salem witch trials and shamed the family, hated Puritan values and spends a whole chapter slamming the dead Judge Jaffrey Pyncheon which was a treat for this reader’s dark humor.

The House of the Seven Gables is a gloomy mansion in Salem, MA which is haunted since its construction, accusations of witchcraft, and death. The ground on which the house is built was wrongfully seized from its rightful owner by Colonel Pyncheon. The rightful owner, executed for witchcraft cursed the whole Pyncheon family.

Hepzibah Pyncheon has opened a store to help take care of Clifford, her brother that has been released from prison, serving 30 years of murder. Hepzibah refuses help from her cousin, Judge Jaffrey Pyncheon, a wealthy but unpleasant fellow.

Phoebe, a distant cousin, arrives, becomes a fixture after charming customers, and basically getting Clifford out of his depression. Judge Jafferey, however, wants to look in the house for information about land in Maine, and threatens the family.

The House of the Seven Gables by Nathaniel Hawthorne