About:
The Age of Plunder: The England of Henry VIII, 1500-47 by W. G. Hoskins analyzes how Tudor England was viewed from the trenches, by the people we never hear about, not by the movers and shakers. 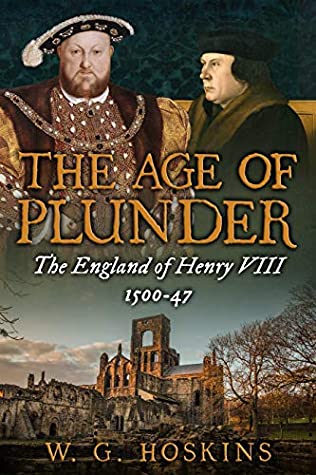 Thoughts:
I have been waiting to read a book like The Age of Plunder: The England of Henry VIII, 1500-47 by W. G. Hoskins for a long time. In all my reading about history, and historical fiction, one of the things I always wonder is how the world felt, smelled, looked to someone who is simply living their lives, trying to make it to the end of every day safely and maybe something to eat.

This book is filled with technical detail, but also analysis of first hand sources, mainly of foreign ambassadors, of what England was like during the times. Much of the information is dry, especially that taken from financial ledgers, but it does provide insight to those interested in the time.

Mr. Hoskins takes familiar aspects of the age, and peels them back to look at how people functioned within England, and within their own villages. The author goes even further to write about how the micro and macro economics were organized (if you can even call them “organized”), and who were the winners and losers of policies.
Spoiler: much like today, those who have the gold made the rules and, more often than not, were the winners of their own policies.

So if Henry VIII’s England was a cesspool of corruption, and plundering, geared towards the keeping the majority of the population living as wage slaves, how did they survive?
The author does go into detail how did the poor survived, during good times and bad, which seem to come in a row of years of bad harvests, drought, or worst – both at the same time.

Mr. Hoskins obviously does not like Henry VIII’s policies, and pegs him as one of the worst English heads of state in history. frankly, I only read a little about Henry VIII, so I don’t know enough (and probably never will) to argue, but he does make a very persuasive argument, and fascinating read as well.

Even if you don’t agree, it’s such a magisterial work of history that you’ll probably enjoy it anyway. I certainly don’t regret the purchase. It’s one of those books I’ll read again and again.