Phasers on Stun!: How the Making (and Remaking) of Star Trek Changed the World by Ryan Britt traces the reincarnation of the famous franchise from the original show, to today’s spinoffs. Mr. Britt is a journalist and writer of fiction and non-fiction books. 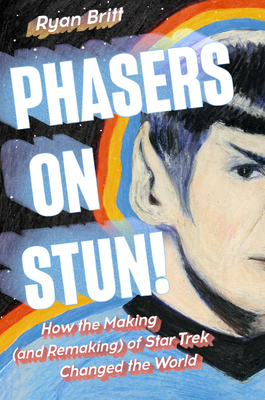 Even though I’m not a superfan of the show Star Trek, I do follow it and enjoy the universe. I even read several books and memoirs, my favorite is Walter Koenig’s Beaming Up and Getting Off.

Phasers on Stun! by Ryan Britt touches every aspect of the TV shows and movies of this beloved franchise, from the original show to the spinoffs, to the remakes, and cartoons. I was even introduced to the wonderful Lower Decks which I had no idea existed, but after watching a few episodes I am now a fan.

This is a solid piece of writing the author makes his case in a clear manner. I especially enjoyed reading his views on the new shows, such as Picard and Discovery. I’ve heard mixed reviews on them, but as always, it’s nice to read a refreshing (for me at least) take on them.

The one thing I didn’t see was a discussion on the fact that Paramount plagiarized the idea of Deep Space Nine from Babylon 5. J. Michael Straczynski discusses this in his book Becoming Superman, but I thought it deserved a mention

Mr. Britt discusses these subjects with passion and humor. I have to admit I’ve never watched the new streaming shows. After all, how many streaming services can one have? However, the thought-provoking chapters about them did convince me that, when I do sign up, to give them a chance.

Phasers on Stun!: How the Making (and Remaking) of Star Trek Changed the World by Ryan Britt