About:
Becoming Superman: My Journey from Poverty to Hollywood by J. Michael Straczynski is an autobiography following the author from his poverty stricken childhood into being a successful writer and a decent human being. Mr. Straczynski wrote TV screenplays, comic books and the movie Changeling.

(OVER) The publisher is giving away one (1) copy of this book – enter via the rafflecoper form at the end of the post. 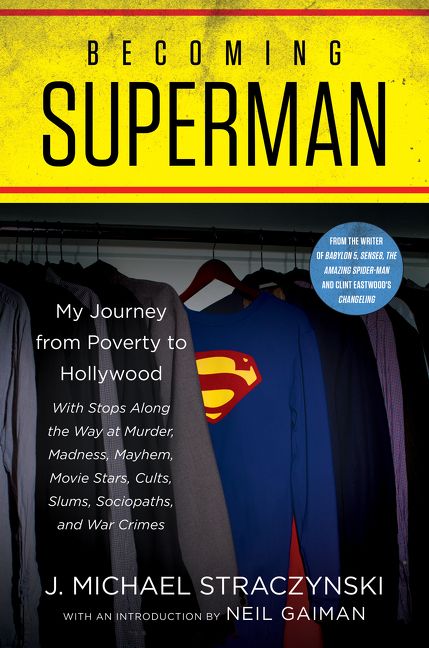 Thoughts:
I actually know the name J. Michael Straczynski from the comic book world, I really enjoyed his run on Superman, Spiderman among other issues I have read here and there. When I saw that he is writing the autobiography Becoming Superman: My Journey from Poverty to Hollywood, I thought it would be an interesting read with some fascinating insight in the industry.

What I didn’t realize, or maybe I did but never thought much about, is how many TV shows Mr. Straczynski was involved in which were some of my favorites. He-Man, Babylon-5, The Twilight Zone,  Sense8, and more. I was even more surprised to learn that he scripted several movies including Changeling and Thor (in which he had a small part) which I thought was very well put together.

Mr. Straczynski’s early life is full of shocking abuses, led by parents who lack any affection for their kids, or morals in general. In order to survive his childhood, Mr. Straczynski realized he must become Superman / Clark Kent in several aspects.
Frankly, it’s amazing that the author became a productive member of society.

The book is very detailed, and sometimes difficult to believe. The author tells the story in a vivid manner, with self-introspection and analysis which makes the book worth reading.

Of course, Mr. Straczynski’s doesn’t disappoint on the sales point of the book – a look behind the scenes of pop-culture.  While sometimes painful, the author’s story is powerful and inspirational, especially when he takes huge chances to achieve a goal.