Dominus: A Novel of the Roman Empire by Steven Saylor is the third book in the Rome series. Mr. Saylor is a bestselling author and an expert on Roman history. 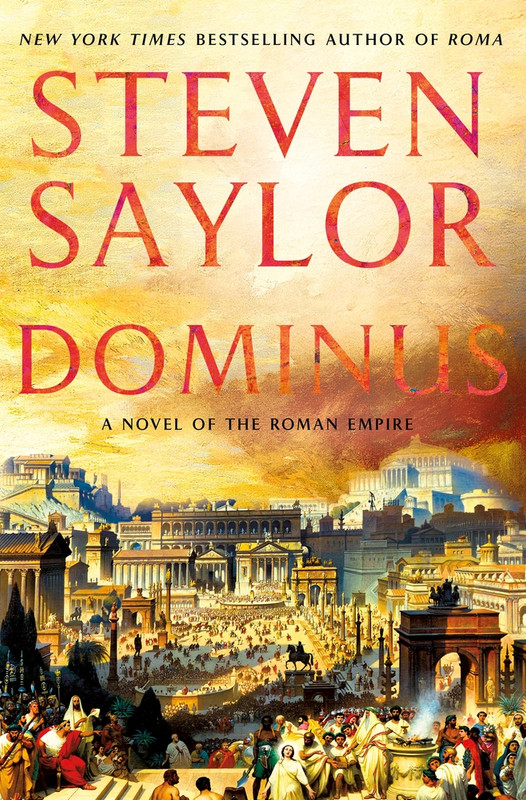 My rating for Dominus – 4
Buy Dominus from Amazon.com*
More books by Steven Saylor*

The scope of Dominus: A Novel of the Roman Empire by Steven Saylor is undoubtedly huge, spanning 160 very busy years. The novel includes many emperors, as well as other important personas during that time, the author wisely chose to concentrate on just a few.

I certainly enjoyed the historical aspect of the novel, changes to the empire in attitude, philosophy, and religion. The Romans viewed Christianity with an especially fearful eye at first, and being tolerable afterwards. As we all know, the religion was embraced by the emperor and the world has changed since then.

The narrative was a bit disjointed. Jumping from one subject to another, from one leader to another. There abrupt transitions brought me out of the story and I sometimes has to read back to make sure I didn’t miss anything.

By all means, spanning this much time is an ambitious project. I read and seen many history books which are twice the size, however only addressing a fraction of that timeline.

As with other novels I read by Mr. Saylor, the depictions of daily life are vivid and interesting. There is obviously a lot of research involved, and the author certainly knows enough to make conjunctures if needed. For me, this was the highlight of the book.

Getting a feel to what the Roman Empire was like, with great details is the strength of Mr. Saylor’s books. Brining historical figures, and others, to life as humans and not caricatures is a wonderful trait of historical fiction novels, and this one is no exception.

Rome has found itself with two emperors – Marcus Aurelius and Lucius, his brother. Marcus, a philosopher, rules the city while Lucius does the fighting and ruling the vast empire.

Ruling such a big country is difficult, certainly when a plague kills many in the city. Many charlatans and false prophets try to take advantage of the situation altogether, including ones from a new sect called Christians.

As Marcus Aurelius passes away, his successor Commodus is given the title of Augustus. Not interested in wars, Commodus wants to enjoy the peace, chariot races as well as gladiator fights. Additionally, Commodus builds an amphitheater, making himself popular with low-born Romans.

Zohar — Man of la Book
Dis­claimer: I got this book for free .
*Ama­zon links point to an affil­i­ate account

Dominus: A Novel of the Roman Empire by Steven Saylor