About:
A Storm of Swords (A Song of Ice and Fire, Book 3) by George R. R. Martin is the third novel in this fantasy series. The series is the base for the hit HBO series  Games of Thrones. 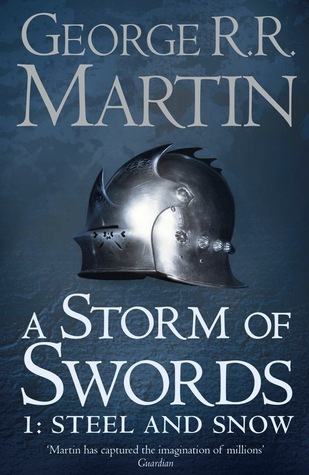 Thoughts:
even though I’m not an avid fantasy reader, I decided to give this series a shot (for the second time), and I’m not disappointed. One of the reasons I enjoy these books so much, over others in the genre, is because of the political aspects of these novels. The characters are engaging, the world building is one of the best in fiction, but the cut-throat political intrigue is, for me, the big draw of this novel.

The events in A Storm of Swords (A Song of Ice and Fire, Book 3) by George R.R. Martin.  are much quicker than the previous ones and the character development happens at a faster pace. Mr. Martin really made an effort to enhance the female characters in the book, they are much more interesting and developed than their male counterparts. Cersei is not all evil, Catelyn Stark is not all good, Sansa is having reality hit her square in the face which relieves her of her little girl princess fantasies, and Danaerys Targaryenis becoming a conqueror as well as a seasoned diplomat.

Arya Stark’s storyline was, for me, the most interesting of the bunch. I know how it turns out of course, but I was honestly disappointed the way it was handled on the TV show and am looking forward to read the next book for, what I hope would be, a better engagement in that aspect.

When I first started reading these books, my friend who recommended them told me that the author keeps surprising the reader. Not only with the deaths of beloved ones, but that I’ll find myself rooting for a character I loathed previously.
I now know what he was talking about.

Unfortunately that friend passed away a few years ago at a young age. I never read the books while he was alive and I wish he was still here so we could discuss them.

Synopsis:
I really can’t write a synopsis without any major spoilers.

Buy A Storm of Swords from Amazon.com*
More Books by George R.R. Martin