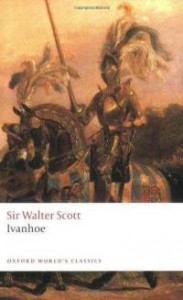 Wilfred of Ivanhoe, a Saxon knight who has just returned from the Crusades and is still loyal to Richard Plantagenet. Ivanhoe returns to a disapproving father who disinherited him because of his alliance to Richard and his love the Lady Rowena. But the protagonist doesn’t announce himself, and takes on the guise of Knight of Ivanhoe, The Black Knight, which causes many collisions.