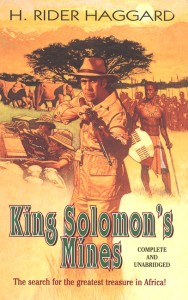 Sometimes the story behind the book is more interesting than the book. King Solomon’s Mines (my thoughts) by H. Rider Haggard also has an interesting story behind the novel that inspired such characters as Indiana Jones. Buy this book in paper or FREE in elec­tronic format. More book by H. Rider Haggard 1 ) When the novel was first published in London, 1885, it was marketed “ The Most Amazing Book Ever Written” and became an immediate best seller 2 ) At the time explorations around the globe were major headlines, however Africa largely remained a mystery. King Solomon’s Mines was the first novel, published in English, to capture the public’s interest. 3 ) Haggard has traveled in Africa when he was 19 and witnessed the Anglo-Zulu War as well as the First Boer War. 4 ) Alan Quatermain is based largely on famed British white hunter and explorer Frederick Courteney Selous. 5) The part in the novel about Captain Good taking out his false teeth and terrifying the locals is based on a true story. Jospeh Thomson, a Scottish explorer, has documented this even in his book Through Masai Land where he scared Kenyan warriors taking out his false teeth and putting them back. Haggard was…

For two days starting this Friday and ending Saturday night, James Conroy’s novel ‘Literally Dead‘ will be available as a free download in Amazon’s Kindle stores around the world. In the midst of the Great Depression, one man must do battle against corruption with nothing but his wits and a host of great literary figures… Amos Jansen is merely a clerk. He is not a crime fighter, the next great writer, or a man of privilege. He is the humble employee of a Chicago literary society. That is, until he is arrested for murder. The scapegoat of a perfidious lieutenant, Jansen stands wrongly accused while his idols rally around him. Literary personalities the likes of Ernest Hemingway, Carl Sandburg, Edna St. Vincent Millay, Nelson Algren, and H.L. Mencken, as well as civil liberties war-horse Clarence Darrow, join Amos in his search for the real murderer of both the society’s vice-chairman and his own father. Will the pen prove mightier than the sword? Will mercenary police, politicians and money-barons meet with justice? Or will Jansen fail to solve the mystery and wind up literally dead? 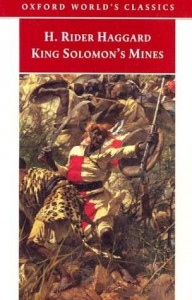 The adventurer and white Hunter Alan Quatermain is approached by Sir Henry Curtis and his friend Captain Good to lead an expedition into the heart of Africa to find Curtis’ brother.  The brother was in search of the fabled King Solomon’s Mines.

Welcome to a new feature of my blog where I’d list books from a certain category which you can download for free. I call this feature Tightwad Tuesday because I’m a tightwad…and it’s Tuesday. For the Kindle: The Remnant – Stories of the Jewish Resistance in WWII (Boomer Book Series) by Othniel J. Seiden After researching the transcripts of the Nuremburg Trials and interviewing ‘The Remnant’ or Jewish survivors of the holocaust, many still living in Israel; Othniel Seiden was compelled to write their startling and remarkable stories of World War II. In this stunning and compelling historical novel about the Jews who were able to remain free and fight, Seiden documents their survival, their suffering, their missions and their guerrilla warfare tactics against the Nazi occupation forces. Also, well documented, the tragedy of Kiev and now infamous ravine of Babi Yar where it is thought that nearly a million people, Jews and non-Jews alike were massacred. These brave few escaped the certain death of their co-religionists by acts of bravery and sheer determination to live. The myth that the Jewish people ‘went to their deaths like sheep to slaughter. . .’ is put to rest forever in the stories of…

Author Suzanne Collins (website) said she got the idea for The Hunger Games while surfing channels and seeing people competing on a reality show and footage of the invasion of Iraq. The two blurred and an idea was formed.

M.J. Rose:  I’ve been fascinated with lost fragrances since long before I started writing The Book of Lost Fragrances… since I found a bottle of perfume on my great grandmother’s dresser that had belonged to her mother in Russia. Here is one of those lost fragrances that stirs the senses and the imagination… (researched and described  with the help of the perfume writer  Dimitrios Dimitriadis)   GUERLAIN – MARIE CLAIRE Guerlain is revered as one of the most spectacular perfume houses in the world. More than 180 years of perfume history has translated into the creation of over 700 perfumes – many of which are rare editions and long-lost gems. In 1996, Guerlain created an eau de parfum for the French edition of Marie Claire magazine – limited to only 1000 examples – which were assigned to recipients by way of a competition. Nowadays, this rare treasure has all but disappeared. Marie Claire (the perfume) was a summery bouquet of white blossoms – jasmine, tuberose and ylang ylang, which bloom over a dry, earthy vetiver base. A perfume with titanic sillage and an enduring presence, Marie Claire has slipped from our consciousness as yet another perfume lost to time. Join Regal Literary in celebrating the ALA’s third annual National Bookmobile Day! In appreciation of our nation’s bookmobiles and the library professionals who keep them running, we’re giving away signed copies of THE NIGHT BOOKMOBILE and HER FEARFUL SYMMETRY by fellow bookmobile lover Audrey Niffenegger, international bestselling author of THE TIME TRAVELER’S WIFE. See more about the books below, and enter to win at http://www.regal-literary.com/contests/bookmobileday2012/. This sweepstakes ends on April 11, 2012. For contest updates, follow us on Twitter @regal_literary. Enjoy National Bookmobile Day, and best of luck! ======================================= The Night Bookmobile By Audrey Niffenegger  The Night Bookmobile tells the story of a wistful young woman who one night encounters a mysterious disappearing library on wheels. This library includes everything, and only everything, she has ever read. Seeing her history and most intimate self in this library, she embarks on a search for the bookmobile. But over time her search turns into an obsession as she longs to be reunited with her own collection and therefore, her memories. The Night Bookmobile is a haunting tale both of transcendence and the passion for books, and features the evocative full-color pen-and-ink work of one of the world’s most beloved storytellers. Her Fearful…