About:
Pilgrim Days: From Vietnam to the SAS by Alastair MacKenzie is a memoir of the author who served in the special forces of several countries over his life. The book documents his life from serving in the New Zealand Army in Vietnam, to the SAS, South Africa, Oman, and finally as a private security agent. 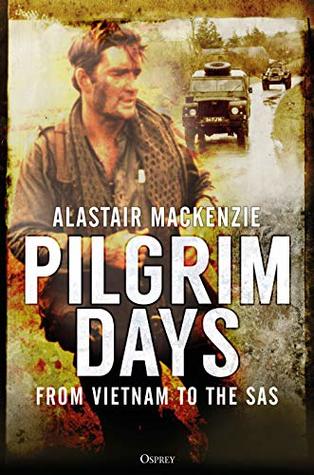 The first part of the memoir Pilgrim Days: From Vietnam to the SAS by Alastair MacKenzie takes place during the Vietnam War, the author served with the New Zealand Army where he insisted that they operated differently than everyone else in the theater, however their field operations seemed the same to me (relying on artillery and air-to-ground attack air support). He and his men took part in major operations, but the battles they fought were small, yet casualties they suffered, and experience they earned.

After coming home, suffering from untreated PTSD condition which alienated his wife Cecilia (who must have been a saint), the author resigned from the New Zealand Army to join the British paratroopers (Paras). Frankly, I had no idea that there were so many professional soldiers out there who are able to switch countries and “get hired” by different armies. Even though I knew that happened, I still find it strange but, I imagine, it’s not different than other professions.

The author eventually joined the British 22 Special Air Service (SAS) Regiment patrolling Northern Ireland, and afterwards became a contractor with the South African Defense Force. I enjoyed reading some of his commentary on Northern Ireland, as someone who is serving there, but really has no stake in the long-term outcome. I found it to be what I expected, a ground level perspective of a professional, more interested in immediate strategy than the politics of the area.

The author discusses training thought his long career and assignments in Hong Kong, Germany, Sudan, Italy, as well as a section devoted to the Sultan of Oman’s Special Forces which he was a part of engaging in counter-terrorism duties. The military, especially the Special Forces, is a young man’s game and eventually Mr. MacKenzie became a salesman for the Royal Ordnance and started his own security consulting company.

I enjoyed reading this book very much, especially about the men whose occupation seem to be taken out of storybooks. I especially enjoyed the anecdotes the author tells, same stories we tell family and friends after a few drinks, but many of us never write down, regretfully.