About:
The Empress by Laura Martinez-Belli (translated by Simon Bruni) is a novel about the life of Empress Carlota, wife of Maximilian von Habsburg of Austria who was, for a sort time, installed by the French as Mexico’s Emperor. Ms. Martínez-Belli is a successful author who has been translated to several languages. 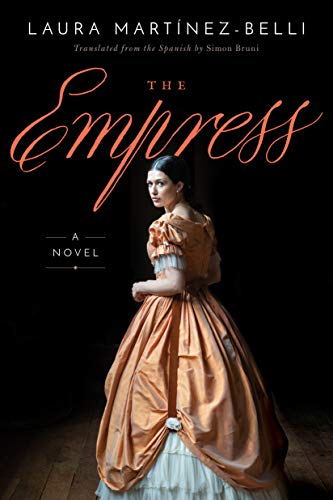 My rat­ing for The Empress — 5
Buy The Empress Amazon.com*
More Books by Laura Martinez-Belli*

Thoughts:
I knew almost nothing about Maximilian, Mexico’s emperor, and nothing at all about his wife Charlotte (Carlota), so I was looking forward to read this book. I also have a soft spot for books which have been translated, since my personal theory is that if they weren’t excellent no one would bother.

In 1863 Napoleon III appointed Maximilian as emperor to Mexico. Together with is wife, Charlotte, a Belgian princess, they embark to take the throne. Maximilian knows that he is being installed as a puppet of the French, with very little real power and devotes much of his time to his hobbies and affairs (with both men and women) neglecting his young wife who has been waiting, for years, to consummate their marriage. As it turned out, young Charlotte, Carlota, is a much more savvy ruler then her husband, putting her energy into running the country and keeping out with the political changes and turmoil at home and abroad.

The Empress by Laura Martinez-Belli (translated by Simon Bruni) is on the long side, but it’s a quick read (comparatively speaking). The story is filled with every kind of court intrigue which would make Machiavelli proud. There are secrets, innuendos, forbidden affairs, illegitimate children, and a whole lot of deception by almost everyone with a name.

The author’s descriptions of Mexico’s landscape, people, and food are fantastic and really play an integral part in the ability to enjoy the book (kudos to Mr. Bruni for the great translation). I really enjoyed reading about the land from the point of view of the newly arrived Europeans, as well as that of the natives.

The cast of characters in this novel is big, and sometimes it’s difficult to keep track of. Add that to the fact that the novel is not told in a chronological order, which sometimes works but could be confusing at times as well. Unfortunately the character of Empress Carlota gets lost in the shuffle here and there, before she is brought back to the forefront.

One of the more fascinating characters in the book is Lieutenant Colonel Van der Smissen, commander of the Belgian Foreign Legion which was raised by Carlota’s father, Belgian King Leopold I, to protect his daughter. The legions was made of young men, almost all with no military experience. One third of the force was killed almost upon arrival in Mexico. Sworn to protect the empress, Van der Smissen became her lover at some point.

The book mixes history and drama, of an imploding world of a young woman who is tough and born to lead. It’s an exciting and gripping dramatization of life in a gilded cage, but it manages never sinks to the “rich poor girl” cliché.