About:
Foundryside (Founders #1) by Robert Jackson Bennett is a fantasy novel, the first in a series it seems taking place on a different version of our Earth. Mr. Bennett is an award winning author. 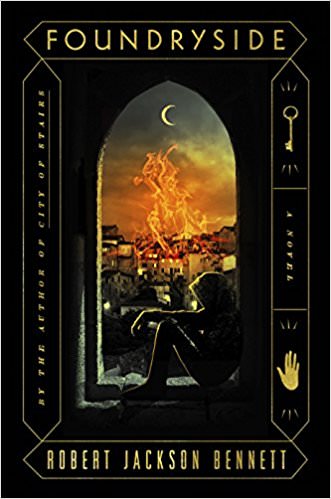 Thoughts:
I don’t know what prompted me to read a fantasy novel all of the sudden. The genre is not my usual forte, I tried to read Lord of the Rings several times but could never make it past 150 pages, and the only reason I read the Song of Fire and Ice books is because of the TV show (admittingly though, they were very good).

I have heard about the author through some forms I’m on and decided to give his books a shot. I’m glad I did, Foundryside (Founders #1) by Robert Jackson Bennett was an excellent, exciting read even for someone like myself that has a hard time “getting” fantasy.

This is not the usual book when thinking about the genre though, there are no elves or dragons, this is more of a book about magic, if anything else. I loved the world building and characterization in this novel, the innovative story and the narrative.

A world where humans can tap the consciousness of objects, convincing them that they are something different is an exciting premise. Telling a wooden pole it is made of steel, which makes it believe it’s steel and hence just as strong, or convincing an arrow it is falling at a great rate of speed when being shot are just a few examples which I can think of throughout this novel.

The book is very smart, the author builds a complex world, filled with multi-dimensional characters, a class system. The author dives into the nuances of why the magic works, how it came to be and the class system which rules the city. A bit of science is injected into the book as well, which makes the story more compelling and believable.

Synopsis:
Sancia Grado, a thief, was hired to steal an item off the docks in her city, Tevanne. This is nothing that Sancia hasn’t done before, but this time the object she is stealing wields an unimaginable power that many rich families with kill to get.

Tevanne is a city that runs on industrialized magic, a system to spells that can overwrite reality. Sancia is the only human, as far as she knows, that can hear these magical objects.