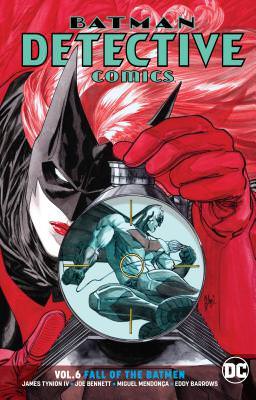 Thoughts:
This whole Detective Comics run has had put the character of Clayface (Basil Karlo) either in the center, or off center, of the story-line, Batman – Detective Comics Vol. 6: Fall of the Batmen by James Tynion, IV (illustrated by Eddy Barrows, Miguel Mendonca, Phil Briones, and Jesus Merino) makes no bones about the fact that he is the main character of this graphic novel. Mr. Tynion has created Clayface as a character who fights with two sides of his identity, but in this graphic novel he makes no bones about putting him front and center.

I enjoyed the art, but I thought that it was uneven due to the stylistic differences of the artists doing this graphic novel as opposed to the style I have become accustomed to which defined the series (this is, after all, a visual medium). I have no real complaints, however, as the art accommodated the story-line very well.

Everything in this graphic novel which had to do with Clayface worked very well together. Mr. Tynion made him a tragic figure begging for a resolution.

The one thing I didn’t understand was the Batmen (the whole team), opposing Batwoman’s solution to the problem. Frankly, I don’t see any other solution but I’m looking to find out what the author had in mind when he put the words “another way”, in their mouths.

I really enjoyed the Annual, which tells the history of Clayface. It would have made much more sense, however, to put the issue in the front of this graphic novel, instead of the back, as is done customarily.

Synopsis:
The Victim Syndicate has turned all of Gotham against Batman and his team in protest. They also kidnapped Clayface while threating to release dangerous criminals from Arkham Asylum unless Batman unmasks himself on live TV.

As Clayface becomes more unhinged, the team is trying to stop him before he destroys the whole city.