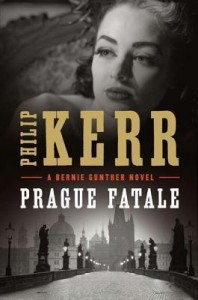 My rating for Prague Fatale – 5

Thoughts:
When I first read Prague Fatale by Philip Kerr I was a bit confused since the series appears out of chronological order. The first book I read in the series, Field Gray (my thoughts), was the seventh and I immediately knew I’d want to read more. I actually bought the collection of the first three novels titled Berlin Noir but haven’t gotten around to reading them yet.

Bernie Gunther is the perfect anti-hero, a tough and cynical Berliner, he is appalled by himself, the job he has to do, the country he loves and the people he works for and with. Bernie goes through life, agonizing over past actions, trying to do as little damage as possible, using a wry gallows humor as a defense strategy.

It’s amazing how many times, just in the two books I’ve read, Bernie comes close to death. The way he talks to upper Nazi officials he should have ended up with a bullet through the head, or worst, half way through the book. In the novel Alone in Berlin by Hans Fallada (Every Man Dies Alone in the US) which is based on a true story, the two protagonist get handed a death sentence for doing much less. However they did not have Bennie’s high level Nazi contacts (“Vitamin P”), his army record (which includes some horrific acts) or his skills and cunning.

The plot is skillfully arranged, centering around a locked room murder in the summer castle of Reinhard Heydrich, Reichsprotector of Bohemia, a fencer, musician, fan of a Agatha Christie as well as one of the cruelest and most brutal in Nazi Germany known as “The Hangman” – and he’s also Bernie’s boss. The setting, Prague and a castle full of Nazis, is brilliant and shows that even monsters tend to blend into one another in a close setting. Towards the end, Mr. Kerr reminds us, in gratuitous detail, what the Nazis are capable of and that the regime is more than just an excuse for amusement.

More interesting than the murder is Bernie’s internal struggle to keep a piece of his humanity intact. Constantly struggling with a death wish, the protagonist is not afraid to speak his mind to commit death-by-Nazi and free him of his nightmares caused by participating in mass murders on the Eastern front (Russia).

The brilliant aspect of Kerr’s books, aside from the absorbing yarns, is that the settings are skillfully composed and bring a life of their own into the tales. The blacked out cities, difficult life, hunger and disease have a noir feel which can barely be captured on screen. Another aspects I love about Mr. Kerr’s books is that he does not underestimate his readership, when you read a Bernie Gunther novel you would need to know your history in order to understand the sardonic humor, period hypocrisies and best of all, the disturbing normalcy of unhinged authority.

Synopsis:
Bernie Gunther returns from the Easter Front to find that 1941 Berlin is not the city he left – and not for the better. Life is unpleasant in Berlin due to blackouts, Czech terrorists, RAF bombings and food rationing.

When Bernie’s old boss Reinhard Heydrich of the Sicherheitsdienst (SD) orders him to Prague to spend the weekend in his country house with senior SS and SD figures, Bernie is obliged to drop everything and go. When a murder is committed in a room that was locked from the inside, the relaxing weekend turns hectic and Bernie is asked to investigate the mystery.

BOOK BLOGGERS – Have you read Prague Fatale? If so link up your review below: