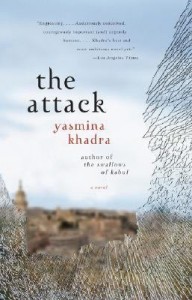 My rating for The Attack – 5

Thoughts:
The Attack by Yasmina Khadra (website) is a wonderful, even handed and fascinating book. Dealing with sensitive subjects yet staying away from a militant point of view is a remarkable achievement by itself, combine that with an excellent story and you’ve got yourself a winner.

The story is told from the perspective of Dr. Jaafari, a naturalized Israeli Arab who works in an Israeli hospital in Tel-Aviv and lives in an exclusive neighborhood in town. There are more than a million Arabs with full Israeli citizenship, who live between worlds and often find themselves in unenviable positions

Even though Dr. Jaafari is suppose to the model of integration and peace, one day his life falls apart when it is discovered that his wife exploded herself in the middle of a restaurant, killing many including children who were there to celebrate a birthday party.

The novel doesn’t directly deal with the complexity of the issues in the Middle East, but with the turmoil of one man who considers himself a secularist, a successful man married to his wife, living in paradise.

As I mentioned, this book is even handed, there is no right or wrong. Both Israelis and Palestinians are neither demonized nor are they being heroic. They are simply people living day to day trying to get through a tough time.

Last time when we visited Israel we had to take our son to the hospital (my wife’s worst nightmare coming true). A Druz doctor took care of our son in the best possible way and we were grateful to him. It did not matter to us, or to the rest of the people in the pediatric ward, the doctor’s origins as long as he knew his stuff. Our son, by the way, was fine – just a lot of gas like his old man and to his mother’s dismay.

The book starts out beautifully, but as the narrator sinks into a state of confusion so does the narrative. The reader isn’t sure what day it is, which twist comes next or even if the plot is told in a linear sense. Anyone who has ever been in a position where they are confused, bitter and depressed or on the brink of madness will appreciate the style.

I also find the author’s view point, that of an outsider, very acute and strangely both remote and intimate at the same time. The on-going conflict in the Middle East are not only religious, but also social and cultural which Khadra observed in a very honest way. The complex realities are brought forth in a multidimensional way with shades of gray abound, not in sound bites which we have sadly gotten accustomed to.

So tell me, what is your favorite multidimensional book?

Synopsis:
Dr. Amin Jafaari is a well-respected Arab who is an Israeli citizen and successful surgeon in a Tel Aviv hospital. One day a massive suicide attack happens close by which mobilizes the whole hospital. After getting home from a very long shift, Dr. Jafaari is woken up asking to come identify his wife’s body who has been killed in the attack. Dr. Jafaari discovers that his wife was not visiting family as she said, but she was the suicide bomber.

And thus the story begins.

Zohar – Man of la Book
Disclaimer: I bought this book.
*Ama­zon links point to an affiliate account
Article first published as Book Review: The Attack by Yasmina Khadra on Blogcritics.

BOOK BLOGGERS – Have you read The Attack? If so link up your review below: