About:
Under the Wide and Starry Sky by Nancy Horan is a fictionalized account of the relationship of famed author Robert Louis Stevenson and  his wife Fanny Van de Grift Osbourne . This is Ms. Horan’s second novel, her first, Loving Frank, was a bestseller and well received. 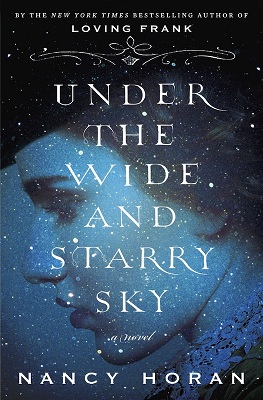 Thoughts:
I was really looking forward to read Under the Wide and Starry Sky by Nancy Horan, as a big fan of Stevenson’s novels I wanted to know more about him and his life. The novel mainly focuses on Mrs. Stevenson and her relationship with this strange genius. Mrs. Stevenson also wanted to be an artist, but she never reached the fame of her younger husband.

The book started off with a bang, describing Fanny as an independent woman running away, with her 3 children, from an abusive relationship to pursue art studies in Europe. Fanny meets the young Robert Louis Stevenson, soon a long lasting, tumulus, relationship starts,

The book, wonderfully written, has some great sections (my favorite is when Stevenson was walking around trying to come up with kid friendly curses for Treasure Island) and enlightening.  The author describes the couple’s relationship as part of a creative process, which I would guess is almost every marriage these days.

However, the book never really captured my interest. I found myself putting it down, picking it up and never really taking interest in Louis or Fanny. The narrative wasn’t flowing and the day-to-day trials of the relationship didn’t capture my imagination and left me unmoved.

Despite the many literary strengths in the book, as well as interesting protagonists, there is no overreaching story line and the pace crawls – that might work in biographies, but does not work for me in historical fiction. If you’re interested in Fanny or Robert Louis Stevenson’s life, this book is accurate, descriptive and will give the reader an insight into the famous couple’s relationship.

At the age of thirty-five, Fanny Van de Grift Osbourne has left her philandering husband in San Francisco to set sail for Belgium—with her three children and nanny in tow—to study art. It is a chance for this adventurous woman to start over, to make a better life for all of them, and to pursue her own desires.  Not long after her arrival, however, tragedy strikes, and Fanny and her children repair to a quiet artists’ colony in France where she can recuperate. Emerging from a deep sorrow, she meets a lively Scot, Robert Louis Stevenson, ten years her junior, who falls instantly in love with the earthy, independent, and opinionated “belle Americaine.”

Fanny does not immediately take to the slender young lawyer who longs to devote his life to writing—and who would eventually pen such classics as Treasure Island and The Strange Case of Dr. Jekyll and Mr. Hyde. In time, though, she succumbs to Stevenson’s charms, and the two begin a fierce love affair—marked by intense joy and harrowing darkness—that spans the decades and the globe. The shared life of these two strong-willed individuals unfolds into an adventure as impassioned and unpredictable as any of Stevenson’s own unforgettable tales.

TLC Book Tour for Under the Wide and Starry Sky by Nancy Horan: