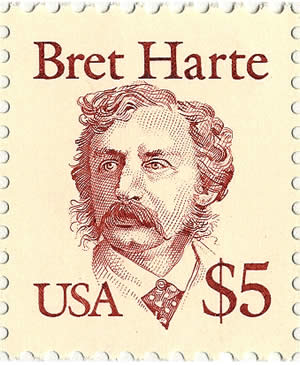 1)      Even though he is associated with the west and western stories, Mr. Harte was born in Albany, New York as Francis Brett Hart.

2)      The author’s father, an orthodox Jewish immigrant, was a successful merchant and one of the founders of the New York Stock Exchange, changed the last name to Harte.

3)      When he was 11 years old, Mr. Harte published a humorous poem called “Autumn Musings”. Sadly, the publication attracted ridicule from his family and is now lost.

4)      In 1853, Mr. Harte moved to a coastal town in California called Union (today’s Arcata) which acted as a provisioning center for mining camps.

5)      Some of the odd jobs he held were minter, messenger, teacher, journalist and guarding treasure boxes on stagecoaches for the Wells Fargo & Co. Express.

6)      When his poem “Plain Language from Truthful James” was published in the Overland Monthly (September 1870), Mr. Harte became a celebrity almost overnight. The poem was later republished as “The Heathen Chinee”.

8)      Mr. Harte never found his publishing footing in the East Coast, eventually he was appointed as Consul in Glasgow in 1880.

9)      Even though he sent money to his wife and kids, not once did he come visit, or have them visit him, during his 24 years on the job.