Potsdam Station by David Downing is a fictional book taking place during the final month of the European theater in World War II. This is the fourth book in this series, named after Berlin train stations. 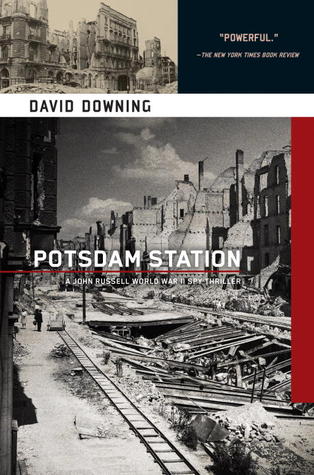 Every time I pick up one of the books in the John Russell series I ask myself why am I not reading more of them. This is the same question I asked myself when I picked up Potsdam Station by David Downing.
I still have no good answer.

The story is told from the point of view of three people, John Russell, Effi Koenen and Paul, John’s son. John Russell is a British journalist and amateur spy, Effi Koenen an actress, and Paul who is John’s son, a member of the Hitler Jugend and a soldier fighting the Russians to defend Berlin.

Mr. Downing draws a picture of Berlin on its last legs. In this torn down town, our three protagonists chase one another, or rather rumors of one another throughout the book, always taking one step forward to slide two steps back and continue their search.

I thought that Effi and Paul were the real starts of this book. John Russell keeps the separate stories all connected, but both Effi and Paul show growth and encounter everyday people who make their choices, good or bad, count.

The best way I can describe this novel is utter and complete organized chaos. I think this is what the author intended and he succeeded in a marvelous fashion.

Even though this book is part of a series, one which I have not read in order, I feel it is an excellent standalone book. I warn you though, you’ll want more.

When he realizes that the Soviets are about to take Berlin, John Russell calls in many favors to get attached as a war correspondent to the Red Army. The NKVD, however, remember John and are willing to grant his wish, but for a very high price.

As a minor celebrity, Effi Koenen doesn’t find it easy to hide in Berlin, but she manages and even helps others to hide. At this point in the war, Berlin is being bombed day and night and every morning more and more of the city’s landscape gets destroyed. A heroine of film, Effi finds herself a real life heroine.

Paul is fighting to defend Berlin. Being conscripted into the German army, this teenager knows that his choices are few and all of them are grim. He is on the losing side and is either going to die, get captured by the Red Army, or try to make it through the battle in one piece and away from zealots willing to throw their lives, and his, into Russian canons.

Zohar — Man of la Book
Dis­claimer: I borrowed this book from a friend
*Ama­zon links point to an affil­i­ate account