Total Recall: My Unbelievably True Life Story by Arnold Schwarzenegger is an autobiography of the famous actor, politician and champion body builder. While the life that Mr. Schwarzenegger has led are indeed astonishing, this book is more of a political memoir and boasting of one’s achievements than that of a celebrity autobiography. 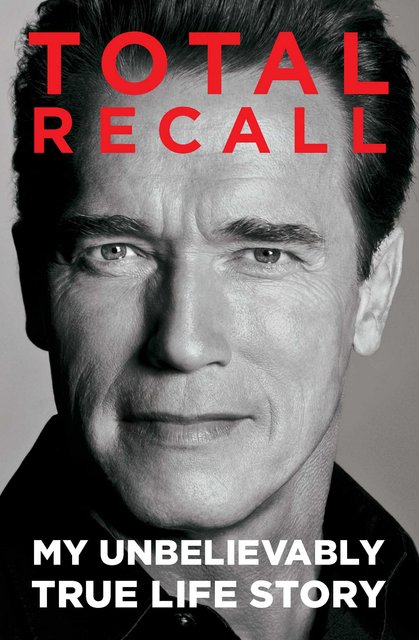 My rating for Total Recall – 4

Disclaimer: I have been a Schwarzenegger fan for decades. Not only of Ahhnold’s (because I can call him that) movies, but also of his bodybuilding, self promotion, business acumen and focus. From some reason I find Schwarzenegger’s story and professional success very inspiring.

Due Governor Schwarzenegger’s recent drama of siring a child out of wedlock this book has gotten a lot of press coverage. The drama gets a few pages towards the end and it is not the reason I read this book. I would have read the book regardless as I have read previous biographies of Mr. Schwarzenegger.

Regardless of what you think of the man, there is a lot to admire. While I realize that behind every autobiography there is a goal, I can usually figure out what it is and this one is no exception. It seemed to me that the author wanted to cement and highlight his political achievements as Governor of California.
However, this is also an amazing immigrant story:

“To think that a scrawny boy from Austria could grow up to become governor of the state of California and then stand here in Madison Square Garden and speak on behalf of the president of the United States – that is an immigrant’s dream.”

The first 200 pages or so of Total Recall: My Unbelievably True Life Story by Arnold Schwarzenegger (website | Facebook | @schwarzenegger)are dedicated to the author’s childhood and bodybuilding career. The author makes a point which he will make over and over in the book – once he sets his mind on something, anything, he will achieve it no matter how difficult it is. Schwarzenegger does say that you have to know what to focus on (for example: this 5’6”unathletic man would never set his sights on the NBA) but once you decide you, and only you, have complete control.

Unlike other biographies I read this one has more personal anecdotes which, for a fan like me, were well worth the price of admission. Sections about behind-the-scenes of favorite movies such as Terminator, Predator, True Lies, and Total Recall, were a treat to read as well as anecdotes from the world of bodybuilding. To be honest, I liked the vast majority of Schwarzenegger’s movies including “The Last Action Hero” even though I thought it was too early to make such a movie mocking oneself, it would have been perfect if it would have been released a few years ago.

Especially poignant were the chapters about the relationship between husband and wife (no, there is no dirty laundry aired), something which I think many people, especially immigrants who married American women, can identify with. While I certainly appreciate Maria Shriver for her brain and talent, I could not imagine being married to someone who grew up with servants, with plenty of “old money” and a family of famous and infamous. I’m sure it was difficult for a man who grew up in a household were only necessities were granted and discipline was the order of the day, every day, to find his love with an heiress and vice versa.

The last part deals with Schwarzenegger’s role as governor of California, an interesting insight into one of the biggest economies in the world in a time of turbulence both ecological and economical. Unfortunately for Mr. Schwarzenegger as well as other politicians, their contribution and foresight could only be measured decades after their term have been over.

There are sections in the book which I found ridiculous, entertaining and ridiculously entertaining all together. For example, the author’s boasting on how he was (single-highhandedly it seems) responsible for, what many regard now as the symbol of psychological inadequacy and the bane of every commuter, the civilian Humvee. Only Schwarzenegger could get away with writing “I became the proud owner of the world’s first civilian Humvee” and come away clean.

Total Recall is by no means a “tell all” book; adding the world “selective” might make the title more descriptive. The book is more of a 600 page resume of an inimitable and astounding career. There are no self-examinations per-say, very little discussion of all the R-rated behavior that has been attributed to him (besides “Arnold being Arnold”) and the subject is always showing himself in the best possible light in every situation. While that is something we’d all like, it does not make an interesting memoir. For a fan of Schwarzenegger like myself, this was a great book, for everyone else or those looking for Latin soap opera style drama, you’ll need to look elsewhere.

Zohar – Man of la Book
Disclaimer: I got this book for free
*Ama­zon links point to an affil­i­ate account

BOOK BLOGGERS – Have you read Total Recall? If so link up your review below: