“The Mark of the Assassin” by Daniel Sivla is fast paced fictional mystery about CIA agent Michael Osbourne. The story takes place mainly in the United States & England and involves several contemporary themes. 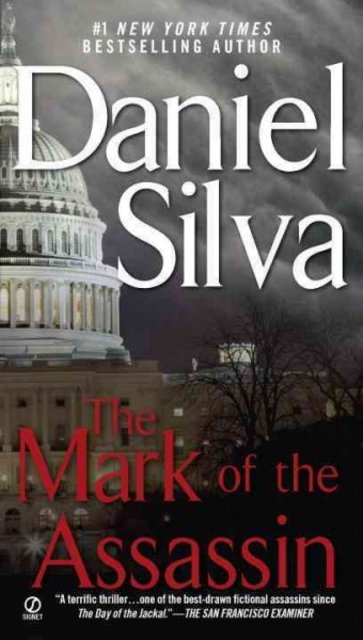 “The Mark of the Assassin” was a good, quick read with several references to Silva’s first novel “The Unlikely Spy” (book review) which I found entertaining – even though this is a separate story.   The book starts out a bit slow (but well paced) and keeps you reading with twists and a surprise I didn’t see midway through.
To be fair though, the setup alone is half the book.
There are many elements in the mix: political intrigue, a wife, medical issues, international locations, twists, turns and a few surprises. Those elements are a winning combination. The book has well developed characters, great plot-line and it kept me interested until the last page, as well as a theory which is thought provoking, if nothing else.
|

The story starts with an act of terrorism. A jet liner is shot out of the sky using an land-to-air shoulder missile, the shooter is a terrorist known to the authorities who is found dead next to the empty missile tube shot in the face three times.

Three shots to the face are the mark of the assassin and CIA agent Michael Osbourne knows it – he has encountered it before while working in the field.  Michael believes that the jet liner was not shot down by Arab terrorists but by someone else and this makes him a target. What Michael doesn’t know is that a group of rich and powerful world policy manipulators have targeted him for assassination and sent the world’s best assassin to do the job; an assassin who justifies his work and morality by the famous Wild West well reasoned defense of “he needed killin'”.
Buy The Mark of the Assassin from Amazon.com*
More Books by Daniel Silva*
|

The Mark of the Assassin by Daniel Silva