In “The Man Who Loved Books Too Much” is a non-fiction book where the author Allison Hoover Bartlett shines a light on the world of collecting in general and the little known world of rare book collecting specifically. Ms. Bartlett writes her fascinating narrative while trying to understand John Charles Gilkey, a man with no real job and no real address and whose only passion is acquiring rare books by any means necessary. 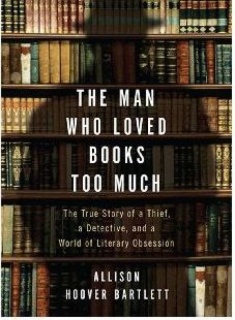 My rating for The Man Who Loved Books Too Much – 5
Buy The Man Who Loved Books Too Much from Amazon.com*
More Books by Allison Hoover Bartlett*
I love books about books – not only do I think that the not-so-obscure references to other books and characters are a little bonding between the author and me (they’re not – but I like to think so) but they also enlarge my already too-long-reading-list.

What makes this book, in my opinion, is the fact that Ms. Bartlett met with Gilkey several times, in prison, after he was released and even at a bookstore he stole from. Gilkey talks about how he “acquired” the books, boasts about his crimes and even tries to justify them to us – which doesn’t really work.

Another compelling character in the book is a dealer named Ken Sanders who made it his mission to capture the person or persons who were stealing from California based book shops. This is no small feat in a business where admission of theft is akin to lost revenue (because clients won’t trust you to sell their books for them) and the amounts stolen as well as the objet d’art are of no, or very little, interest to the local Constables.

Ms. Bartlett peppers the book with anecdotes about past thieves and builds a very interesting narrative around a story which otherwise would make a meager subculture take notice, but skid on the sidelines for the rest of us.

As a collector whose objects of passion have spiraled beyond his meager means to continue collecting them, I certainly understand Gilkey’s frustration (after all speculation ruins every hobby once it turns into a business) but I find his justification for stealing abhorring, nonsensical and immature. From what I gathered, Gilkey is a manipulative con man and a thief – not a bibliophile.