Son of Hamas: A Gripping Account of Terror, Betrayal, Political Unthinkable Choice by Mosab Hassan Yousef and Ron Brackin is a gripping autobiography of a man who is caught between his own morality and what is expected of him by his community. Mosab is the son of a Hamas leader who is caught and jailed by the Shin Bet (Israel’s internal security services). After gaining his trust, the shin bet asks Mosab to work for them, as a double agent, which he did superbly. 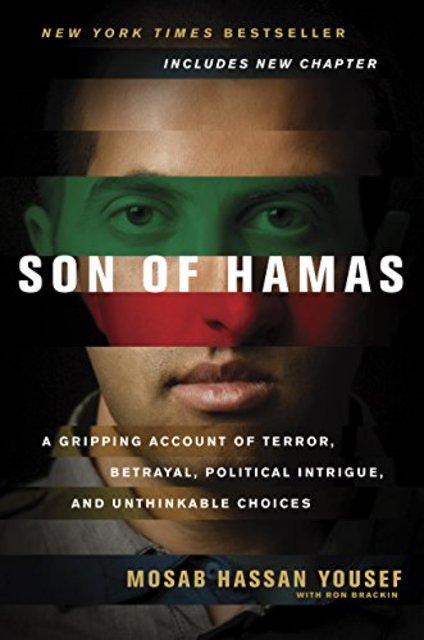 Toward the end of the Century, Mosab encountered a British pilgrim who invited him to a class about Christianity. Always curious and obviously and intelligent fellow, Mosab went and was slowly indoctrinated into the teachings of Jesus. In the following months, along with his intelligence work, he slowly abandoned the religion he inherited towards the one he found.

Mosab worked for Israel for a decade, from 1997 to 2007, in deep cover and gaining the trust of Hamas leadership mainly due to the position of his father as well as help from the shin bet. During those years Mosab helped capture numerous terrorists, stop suicide bombers, prevent assassinations, was an endless fountain of valuable intelligence information and last but certainly not least, kept his father out of jail. Many of the lives he helped save are Israelis but countless more are Palestinians.

There are several fascinating aspects in this Son of Hamas: A Gripping Account of Terror, Betrayal, Political Unthinkable Choice by Mosab Hassan Yousef and Ron Brackin . Mosab describes the inner workings, or rather the lack-of, of the Hamas. As the son of one of the founders, Mosab was up to his neck in Middle East politics and intrigue which gave him a unique position and fresh views which most people outside the Middle East, or even outside his standing, did not get to hear. Through his eyes it is understandable how the cycle of violence could get so much out of control and how people, who would never hurt a fly, suddenly become blood thirsty.

There are no good guys and bad guys in this book. Granted, Mosab portrays the Israelis as the “less bad” guys but neither side is flexible enough for a Middle East solution to actually work. The cycle of violence, an eye-for-an-eye-for-an-eye… will continue infinitely because there is an ideological difference between the sides, and a war of ideas cannot be won with tanks or suicide bombs. Mosab found that the Israelis have a healthier respect for life than he thought which is understandable since he has been on the receiving end of Israel’s wrath since birth – however Israel is still willing to torture and kill to further their agenda.

With all the religious overtones of the book, I never felt preached to, or that Mosab was trying to push Christianity down my throat. Quite the opposite, he clearly states that religions is not the problem, nor is it the solution. Mosab realizes that the Palestinians are oppressed by their own people as much as they are by Israel and that both sides are manipulated by power hungry mongrels who would let people suffer endlessly just so they could enrich themselves.

This is a gripping story, well told and expertly written. The unique perspective this book provides is interesting and enlightening. It seemed that Mosab was writing the book for himself and for his father, and less for the reader – which I found to be very personal and a great way to tell the story. This book, even though short, is well worth reading.