The Grey Zone by Jason McMillan is a novel taking place in 2072 when the United States joined a worldwide initiative. This is Mr. McMillan’s first book. 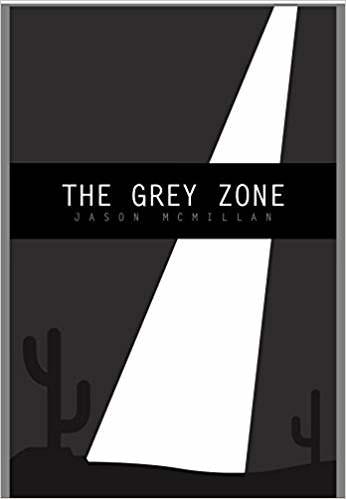 The synopsis for The Grey Zone by Jason McMillan sounded very interesting to a political junky like myself, add to that the sci-fi/fantasy element and I was sure to pick up the book. The author creates a world where two extreme political ideologies clash, and in a country as diverse as the United States, with people who pride themselves on being independent, that clash creates an interesting society.

I found the book to be very interesting on several levels. The world building, the multiple story-lines, and most of all the political aspects and parallels to today’s conservative/liberal/Republican/Democrat/Independent narrative.

The world building aspect was one which I can see the author expending onto in the future, especially when national and global policies are put in the proper perspective without the noise surrounding their implementations. I liked that the world hasn’t evolved, technologically wise, out of control but technologies that we either have, or are very close to having, are standard. If I could advise the author, I’d only mention to look into the not-so-new research of powering devices with light as oppose to electricity.

The multiple story-lines were interesting, I saw that several readers got confused, I can see how they did but for me everything made sense. The story follows the journalist, Lt. Director Luna who is a very senior official in the government, responsible for the “grey zones’, those areas who have not officially joined the Global Federation of Nations to implement the Basic Human Standard, and that of Wade, a religious man, anti-GFN, who borders the line of terrorist/martyr/useful idiot.

For me, the most interesting aspect was the political angle, how two extreme ideologies clash and the ideological hypocrisy one must suffer in order to support the bigger picture. What happens when one ideology will win over the other, and how the extremists who support the one that lost will react? Does the end really justifies the means?

Mr. McMillan’s world is not black and white, good people do bad things for good reasons, ideologists of all kinds believe that they’re 100% right, a problem for those who slightly disagree and an issue for those on the receiving end of their methods. A parallel line is drawn between religion and ideology and how extremists are really not that different.

The United States has joined the Global Federation of Nations to implement the Basic Human Standard, which improved life for much of the world. Fifteen years later, many Americans still dismiss the principles of the GFN, and fight against it and its forces.

Natalie Kelley, a journalist on her way up, reports on the American terrorist groups who oppose the GFN. Natalie realizes that there might be a bigger story when she investigates a restaurant attack in Oklahoma City.

The Grey Zone by Jason McMillan