I got this book for free as part of the TLC Book Tour promotion.
The publisher has made available one (1) copy of “The Fifth Servant” to be given out- enter at the end of the post. 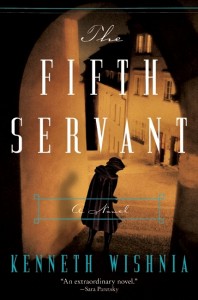 My rating for “The Fifth Servant” – 5

About:
“The Fifth Servant” by Kenneth Wishnia (Website) is a fictional mystery set in 1592 at Jewish Ghetto in the city of Prague. The book is rich with Jewish culture and the tensions between Jews and Christians.

Thoughts:
“The Fifth Servant” by Kenneth Wishnia is told through the eyes of Benyamin Ben Akivah, a Talmudic scholar who follows his disgruntled wife from Poland to Prague. The book takes place over three days and two nights when Benyamin tries to solve a blood libel incident which weighed down the Jewish communities up until the 20th Century.

This is a clever book, filled with excellent research, vivid imagery, and good writing sprinkled with humor. The medieval ghetto life is convincing and rich in detail, city of Prague comes to life even though it wouldn’t be a place I’d want to live in (especially not at that time). While the book is a mystery it is not formulaic and uses a new and unique voice which examines the ancient Jewish texts like the bible, Talmud, Torah, Kabbalah and to my joy The Book of Zohar to tell the story.

There are many conflicts in the book, not only between Jews and Christians but also between rich and poor, men and women, freethinking rabbis and their conservative counterparts as well as leaders of the Christian church who see the role of the inquisition as fleshing out heretics and those who are just a bit too happy to use it as an excuse to torture Jews and take their fortune (splitting it between the emperor and the Church as was the costume).

I liked the way that Mr. Wishnia imagined how people in the 16th Century thought. Women, who were part of the community, had to do things in secret even though they were pillars of the community. There is great insight on how Jews were persecuted and the struggles they faced. However, the author uses these adversities to highlight the Jewish spirit and perseverance.

There are many characters in the book but and they are all very well drawn. Besides the protagonist a standout characters was Anya, a bright Christian girl, daughter of a butcher as well as Sheriff Zizska of Prague, Rabbi Loew and even Emperor Rudolph II made an appearance.

While I truly enjoyed this book, it is not for everyone (but really, what book is?). The book is filled with my kind of humor, sarcastic, self deprecating and sardonic however it is not a light or easy read. This book will most likely appeal to those interested in Jewish history, Jewish folklore and/or the time period.

There are many Hebrew, Yiddish and some German words/phrases peppered throughout the book, the author does translate the important ones and also includes and excellent glossary at the end to assist the readers.

Synopsis:
Benyamin Ben Akivah is a shamash, the caretaker of a temple, and new to the Jewish community. Benyamin is not only a scholar but a proud Jew with a temper which he finds difficult to control. When a Christian girl’s body is found in the ghetto just before Passover Benyamin must prove to the Christian community that it is a blood libel case before the ghetto is destroyed.

Working together with the freethinker Rabbi Lowe they must work fast while keeping the Jewish laws and restrictions regarding the holiday of Passover.

Published at Mysteries In Paradise
BOOK BLOGGERS – Have you read “The Fifth Servant”? If so link up your review below