Article first published as Book Review: The Golem and the Jinni by Helene Wecker on Blogcritics.

About:
The Golem and the Jinni by Helene Wecker is a novel taking place in New York, 1899. The story weaves two mythical creature from two different cultures to create a different kind of story altogether. 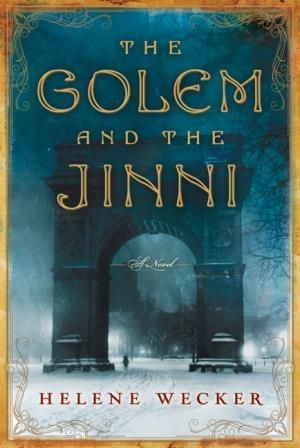 My rating for The Golem and the Jinni – 4

Thoughts:
The Golem and the Jinni by Helene Wecker (website | Facebook | @helenewecker) is part historical fiction, part fantasy told as a fairy tale in turn of the century New York City. The story unfolds in parallels, that of Chava the Golem and that of Ahmad, the Jinni.

I liked the way Ms. Wecker endowed each creature with a childlike curiosity which, I thought, was a great way to tell the story from a historical angle (exploring 1899 NYC) as well as moving the story forward (they don’t know any better). Even though the Jinni is hundreds of years old, he was stuck in a bottle for so long that everything is new to him, especially coming from the deserts of North Africa to New York.

I wanted to read the book because I find the whole Jewish mythology around the golem fascinating.  The golem is a creature made out of clay; the most known tale is that of the late 16th Century rabbi of Prague, Judah Loew ben Bezalel. The rabbi, it is said, brought his golem to life in order to defend the Prague ghetto from anti-Semitic attacks.

The book was an interesting and delightful read, I immediately got sucked in, somehow lost a bit of interest in the middle but found myself engrossed in the story once again towards the end. The conclusion left me wanting more of a resolution, but that is just a personal choice.

The characters are interesting and engaging, I even found the secondary characters and their stories absorbing. This is one of these types of books to goes on tangent, where a background to a character is told as a story within a story, something I admire and recognize how difficult it is to do well.

The author did a great job conveying the characters’ fears and desires, slowly opening up to life around them with all the dangers they entail. The Golem, a creature of earth, the Jinni, a creature of fire, seem to be aware of their own uniqueness but they don’t view their metaphysical attributes as strength, quite the opposite, often it is a hindrance.

The steps Chava takes to be counted as among the living are superbly told, never rushed or utopian, she slowly becomes a part of the lives which surround her. The Jinni also finds it difficult to adjust to his small community but takes the opposite route from Chava. Instead of immersing himself and trying to be part of the community he does what he wants, when he wants and damned be the consequences. When the two meet, instead of getting along they bicker and argue. She wants him to be more concerned about his surroundings; he wants her to take advantage of her abilities more often and for something other than baking or working around the clock.

The narrative is mostly about the attempts of the two creatures at hiding and/or assimilating to their surrounding, their hopes and fears as well as history. To my surprise I found the book to have a quite, character driven narrative with a fast-paced, action-filled ending.

I liked this novel very much but it was missing that extra “oomph” which I was hoping for, that blend of Yiddish / Arabic slang in midst of the NY ghetto, I missed the cultural jokes which the immigrants are so famous for and are used by other authors (Shalom Aleichem come to mind) to make a distinct point while keeping the mood light. The publisher compared this novel to Jonathan Strange & Mr Norrell by Susanna Clarke and I can certainly see the similarities, but what made Clarke’s book great is the literary voice, old spelling, dry wit (which includes the wonderful footnotes) and very curious prose – things which I think are in this novel, but simply not as defined. However, the book is still a wonderful read, enchanting and grasping which I enjoyed all the way through and will certainly be watching out for Mr. Wecker’s next triumph.

Synopsis:
A disgraced Polish rabbi brings a female golem to life at a request of a rich patron. The patron dies at sea, en route to America, and the golem, Chava, finds herself alone without a master; however she soon is taken in by an elderly rabbi who introduces her around the Jewish community in New York City.

Ahmad is a jinni who was trapped in a flask in the Syrian desert but was released in New York City, but he is not free yet. When Ahmad meets Chava, the two lost creatures become unlikely friends with a mystical connection.

TLC Book Tour for The Golem and the Jinni by Helene Wecker: