About:
The Exiles by Christina Baker Kline is a historical fiction book following two English women who were sentenced to the penal colony in Australia, and one native girl. Ms. Kline is an award-winning author. 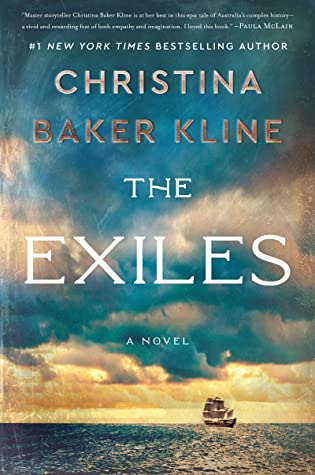 My rating for The Exiles – 4
Buy The Exiles  from Amazon.com*
More Books by Christina Baker Kline*

Thoughts:
I really enjoyed Orphan Train as well as A Piece of the World so when offered The Exiles by Christina Baker Kline I thought it would be a nice read, as well as a book my wife would enjoy. Ms. Kline knows how to tell a story , keep a comfortable pace, which makes the reader want to continue reading.

Half the book takes place in England, and tells of the plight of women prisoners who lost the few civil rights they had to begin with for, seemingly, small infractions. The other half takes place in Van Diemen’s Land (today’s Tasmania), an Australian penal colony.

I did not expect the story to also detail the brutal voyage from England to Australia on, what basically is, a slave ship. It’s astounding that people survived the English jail, the transport, and then the brutal conditions in Van Diemen’s Land.

Ms. Kline does include the horrible atrocities done to the Australian Aboriginals people. A part of history which both the English and Australians are comfortable forgetting about. Unfortunately, the one Aboriginal character we follow disappears towards the end. I don’t know if that was a conscious choice by the author to symbolize what happened to the Aboriginal people, or simply it was the end of the road for the character.

The book was a quick read, but engaging and interesting. As always, I appreciate well researched historical fiction which allows me to learn as well as enjoy a good story along the way.

Synopsis:
Evangeline, was the daughter of a London clergyman who, while intelligent, never learned the skills expected from her in society. After his death she got a job as a governess only to be impregnated, accused of thievery and thrown in jail, eventually to be sent to the penal colony of

Hazel and Evangeline meet on the slave ship, the Medea,  on their way to the Australian penal colony Van Diemen’s Land. Hazel is a skilled herbalist and midwife and makes a name for herself with the women prisoners as well as the sailors.

Mathinna is an Aboriginal orphan which has been involuntarily adopted by the new governor on Van Diemen’s Land. After her usefulness dried up, Mathinna is sent to an orphanage to make her way in life by herself. She was eleven years old.

Zohar — Man of la Book
Dis­claimer: I got this book for free as part of the LibraryThing Early Reviewer Program
*Ama­zon links point to an affil­i­ate account