About:
Disney’s Land: Walt Disney and the Invention of the Amusement Park That Changed the World by Richard Snow is a non-fiction book chronicling the creation of Disneyland in California from conception to execution. Mr. Snow spent many years as an Editor in Chief of American Heritage magazine, as well as consultant on historical movies and documentaries. 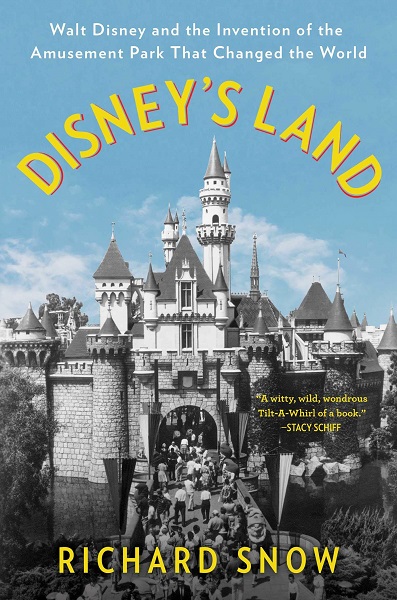 Thoughts:
I always knew that to build a park is not easy, but I’ve never imagined the huge chances Walt Disney took when dreaming up a park (the phrase “theme park” did not exist before Disneyland) which will make all the others look amateurish. I could only imagine the horror of Roy Disney who was responsible for the finances of making Walt’s dream come true.

In Disney’s Land: Walt Disney and the Invention of the Amusement Park That Changed the World by Richard Snow tells us how this seemingly insane dream took shape. Walt’s pipe dream of “the happiest place on Earth” became a reality at an immense cost, in both sweat and treasure. Disney sold sponsorships to the park in order to make the cost more palatable.

My favorite part of the book was the engineering of the rides, pioneering technologies in miniature, engineering, and materials such as fiberglass. I enjoyed reading a chapter dedicated to the Peter Pan Flight, which to this day is my favorite ride in the park, albeit it is Disneyworld in Florida.

Walt Disney’s attention to detail is amazing, but like many great men this part of his personality caused great concern and setbacks when it came to the park. He insisted on details being absolutely right even though no one but him and the workers will see it. Whether he was right or not depends on who you ask, personally I’m amazed at the details in the parks and could enjoy simply walking around appreciating them all without ever going on an actual ride.

To promote his park Disney started a weekly show on ABC, who also promised to sponsor the park, which worked even better than he planned, when opening day was mobbed with people. The rides broke, there was no drinking fountain because the plumber had to decide between operating bathrooms and operating fountains – and wisely chose the former. The story about Walt eating lunch with the workers, buying a hotdog and walking away hence deciding how far apart garbage cans need to be was enlightening and as it was charming and a great example of some of the anecdotes in this book which are worth the admission price (pun intended).

I really enjoyed reading about the engineering issues, which needed bright minds and ingenious ideas to solve. The author also goes into Walt’s dispute with laborers and unions, he was under immense pressure to open the park as soon as possible and drove the workers hard.