About:
The Christian Fallacy: The Real Truth About Jesus and the Early History of Christianity by Paul McGrane is a book which could be considered about religion, or a history book depends who you ask. I’m sure this book will offend many (I know why, but frankly don’t understand why), but it certainly gives one a lot to think about. 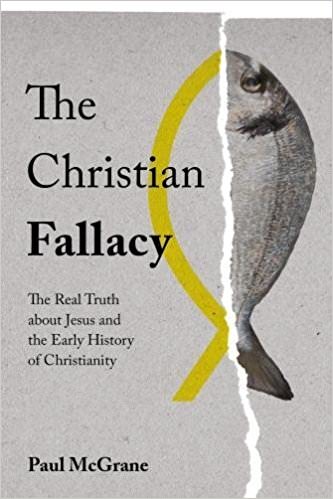 Thoughts:
I don’t know what prompted me to read this book. I have read the Jewish Bible as well as the Christian Bible in Hebrew and English, but I never put too much thought into either. I enjoyed the stories, mainly due to the sex and violence, but also learned a few lessons along the way.

I’ve read several books which extrapolate on biblical stories and enjoyed many of them very much. those stories now have their own genre, biblical fiction, and they deserve it. When I read the synopsis for The Christian Fallacy: The Real Truth About Jesus and the Early History of Christianity by Paul McGrane I thought it would be an interesting take on old stories and I liked the author’s promise that if a source was not agreed upon as legitimate by academia and religious authorities he wouldn’t use it.

The premise of the books is that the biblical Jesus (written as Jesus) did not exist, but is an amalgam of several people one of them is the high priest at the Jewish temple (written as Jesus), as well religious marketing by Paul and those who wrote the Christian Bible for Rome.

I really enjoyed that the author didn’t just look at historical contexts, but also at political and social contexts at the time the texts were written. Mr. McGrane analyzes the old texts and realizes that the traditional chronology must be rejects and rearranged to make sense.

I don’t know if he’s right, but it sure makes an interesting read and food for thought.

The author wrote about a very sensitive subject but did a good job at it.
Would he convince a believing Christian that they’re wrong?
Probably not, I’m sure many are well aware of the inconsistencies in the texts and those that are not are clearly like to be blissfully ignorant.
Would the book cause a staunch atheist to crawl to church and beg redemption?
Certainly not.

But both would find this reading an alluring and appealing account of how a major religion came to be.