One Giant Leap: The Impossible Mission That Flew Us to the Moon by Charles Fishman tells the story of the Americans who fought tooth and nail to accomplish the task of sending me to the moon, and bringing them safely back to Earth. 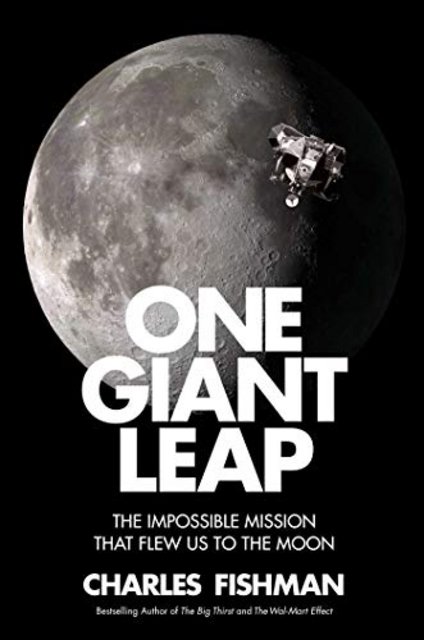 I’ve read many books about the space program, not nearly as much as other enthusiasts, but enough to hold on to a simple conversation. Being that this year is the 50th anniversary of the moon landing, an event which to me is still as exciting as it was back then, there is a lot of material, much of it new (to me) being published.

I had no idea what to expect from One Giant Leap: The Impossible Mission That Flew Us to the Moon by Charles Fishman, I thought that it would be another book, rehashing to space program up to the mid-1970s, than complaining about the lack of advancement, than making a push for lunar exploration/meteor excavation/space tourism/Mars mission.

What I got instead was a behind the scenes stories of those that help get men to the moon, several cool anecdotes (the American flag was an afterthought) and the impact the space program had, which we feel to this day.  The extraordinary book starts with something that I’ve been actually wandering about for a while: what does the moon smell like? This was my favorite part because I could imagine myself sitting with astronauts telling this very personal story.

The author goes on to describe how NASA had to invent management processes for such a huge project, which involved up to 20,000 separate companies, all told from the perspective of a few people in upper management. A very interesting, insightful, and readable section which could very easily be made into its own book.

Even though people these days don’t realize it, we all benefited from the space program, the book has a whole section which tells of the earthly accomplishments be it ball point pens of the sharp drop in computer chips which help usher in the digital age much quicker. As in everything, there is the bad side as well, the huge amount of money spent on the space program could have been used elsewhere (even though, that’s not how it works), the book does not shy away from this issue either, and, while not discussing it in depth, at least acknowledges that it exists.

More than anything, this book puts the Apollo mission in the social and political context of today’s world. The immense achievements we live with today, the inspiration of generations and management of large projects are just a few things which we owe to the space program.

One Giant Leap: The Impossible Mission That Flew Us to the Moon by Charles Fishman