About:
No hesitation by Kirk Russell is the third book in a series featuring FBI agent, and wounded sapper, Paul Grale, this novel spends time on issues concerning artificial intelligence. Mr. Russel has written several novels, and he is in the process of writing the fourth novel in the series. 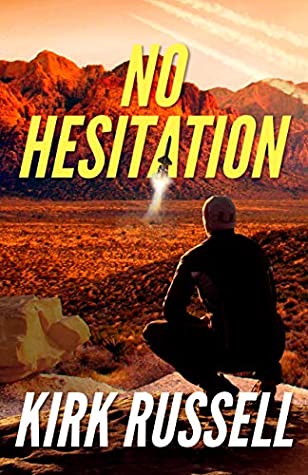 Thoughts:
One of the  themes No hesitation by Kirk Russell tries to address is artificial intelligence (AI), and at what point to we stop pushing it. This is a very interesting discussion which people have had for ages. The author’s AI uses very powerful code, which can even learn to replicate itself (if it has parts), and can run millions of scenarios a second to take action. Those actions, however, seem to humans as unnecessary, cruel, and irresponsible.

The acts might or might not be proper, as our minds cannot follow the AI’s logic or how it attempts to foresee the future. The two programmers in the story act as a collective conscious of creators who regret their creation, that is out of the control. As many other weapon smiths have found out, once their weapons took on their own lore, it’s difficult to control. Many novels have been written about this issue, from Greek myths, to Frankenstein, to Watchmen, and to fictionalization of the Manhattan Project.

One other theme, which I found to be just as interesting, is when Grale is looking towards the near future and realizes that his career is over, and he needs to plan ahead. This is something many people who are in mid-career realize, sometimes it comes as a shock (injury, fired) and sometimes the clues have been around for a long time. Sometimes you cannot keep up with the new technology, keep learning at nights or in Grale’s case an injury which has been bothering him, and getting worst, for years.

I wouldn’t call the book fast paced, but the narrative moves quickly enough without sacrificing the story or the characters. I did not read the first two books, but frankly didn’t feel like I missed anything relevant.  Besides the conjuncture of the AI technologies, I did not feel any of the story was way out of line, the author did not hurry his characters to move the story along, as its moves at its own pace.

Synopsis:
Paul Grale is an FBI bomb tech investigating the disappearance of two computer programmers responsible for a breakthrough in artificial intelligence. The government is afraid they either got kidnapped, or plan to sell the code.

Grale finds out that the AI is a dangerous drone, which runs through millions of scenarios before deciding to attack whoever enter the Las Vegas’ base perimeter. The AI, however, makes mistakes, or sees so far into the future when it makes its decision, and has no ability to think like a human before making a life or death decision.

To Grale’s chagrin, a known bomber that works with terrorist groups might be involved. That is a man that Grale and other intelligence agencies around the world have been trying to catch for decades.

Buy No hesitation  from Amazon.com*
More Books by Kirk Russell*