Invisible Heroes of World War II: True Stories That Should Never Be Forgotten by Jerry Borrowman is a book with mini-biographies about several heroes of the war, which are rarely talked about. Mr. Borrowman is an award winning author and speaker. 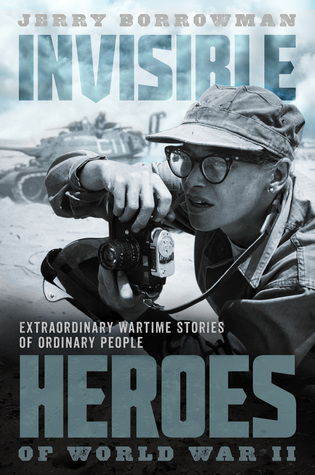 The general consensus around the people who fought in World War II is that they were The Greatest Generation, as coined by Tom Brokaw in his book by the same name.  Invisible Heroes of World War II: True Stories That Should Never Be Forgotten by Jerry Borrowman is a poignant tribute to some of those folks who were brave as they were determined.

This is not a long book, it tells of ordinary people doing extraordinary things. Not all of the people the author talks about achieved much fame or were in the public eye, but they do deserve to have their story told.

The book touches on Pat Patton, a POW at Bataan, Nancy Wake of the French Resistance, Navajo Code Talkers, journalist Dickey Chapelle, African Americans at war, and the tip of the spear, the Combat Engineers.

My favorite part was that of Joseph Medicine Crow, an author, historian, and the last War Chief of the Crow Nation. During World War II, Medicine Crow completed the four tasks which were required of a warrior to become a war chief: touching an enemy without killing him (counting coup), taking an enemy’s weapon, leading a successful war party, and stealing an enemy’s horse.

This collection of short, but memorable stories is a great introduction to the varied subjects and contributions many people made to the war effort. Of course, several of those people were not “invisible” by any means, quite the opposite (Dickey Chapelle was, and still is, a published photojournalist and Joseph Medicine Crow has schools named after him), nevertheless they deserve to be mentioned as much as possible.

Invisible Heroes of World War II: True Stories That Should Never Be Forgotten by Jerry Borrowman