The British are Coming: The War for America, Lexington to Princeton, 1775 – 1777 by Rick Atkinson is a history book, first of a trilogy, which describes the first 21 months of the American Revolutionary War. Mr. Atkinson is a Pulitzer Prize winning journalist and historian. 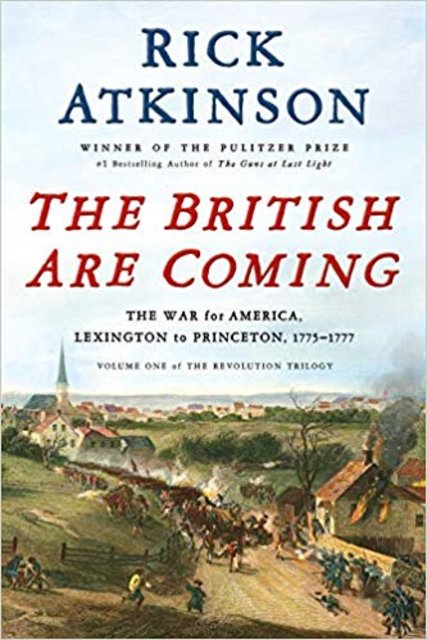 We always learn about the heroics of the American Revolutionary War, but many seem to forget that it was still war, brutal and violent with small acts of heroism as well as nation building events. In his book, The British are Coming: The War for America, Lexington to Princeton, 1775 – 1777, historian Rick Atkinson doesn’t forget that, quite the opposite, his narrative thrives on those subjects.

The books description of battle and tactics, especially those in Boston (Lexington, Concord), are vivid, exciting and informative. The author puts in a lot of detail which he either simply made up, or discovered by conjuncture. For example, how did he know that the soldiers wet shoes squelched?
You either assume, or try and find out what the weather conditions were on that day centuries ago (which is doable), or read a lot of firsthand accounts and make some assumptions.
Being that the author is a serious journalist and historian, I choose to believe the latter two – also, there are tons of footnotes so my “belief” is based on this.

The author goes into much more detail than other books, who try to encompass the whole Revolutionary War into one volume, as big as it may be. Not only does the author discusses strategies, outcomes, and consequences, but also describes the day to day life of the lowly grunt who left their house and home to join a fight which they could, and some would, lose everything.

The great detail which the author supplies does not bog down the narrative. These details are there to support the narrative and primary sources being quoted, not to impress the reader with information overload (or worst, show off the research).

Mr. Atkinson wrote a very readable piece of history, which makes you re-think many things you learn. Historic battles which seemed like the epic work of logistical masterminds were sometimes acts of desperation or simply improvised, painting a convincing picture of what it must have been like to fight for the “glorious cause”.

Buy The British are Coming from Amazon.com*
More Books by Rick Atkinson*

The British are Coming: The War for America, Lexington to Princeton, 1775 – 1777 by Rick Atkinson