In Genghis Khan and the Making of the Modern World author Jack Weatherford shows that history is not simple. It is a mistake we learn in our schools when we are taught history through memorizing dates in a linear fashion. History is alive, it is complex and there are always small events leading up to a big episode. Professor Weatherford’s book builds a fascinating story around the many achievements of Genghis Kahn, as well as his military genius and leadership skills. 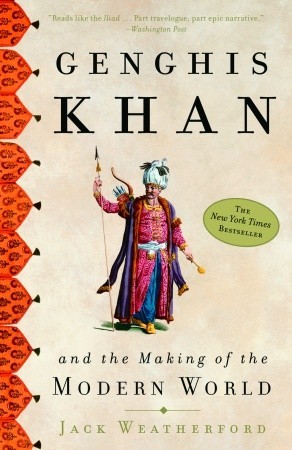 Even though I have heard the name Genghis Kahn before, I’ve never done much reading on him or the Mongol Empire. I missed out on a fascinating story and glad I found this book. The narrative is written in such a way which the reader understands the socio-economic realities the Mongols lived in, as well as the brutality of how wealth was won.

I have never appreciated the genius which was Genghis Kahn, always portrayed as a brute in pop culture and by his enemies. Uniting nomad tribes to form a strong Mongolia, organizing armies, creating a working bureaucracy, beginning the concept of diplomatic immunity, understanding economical achievements and even legislating laws which he must also obey (something I cannot say for today’s leaders) are part of his little known heritage.

The legacy of Genghis Kahn is also a major character in this book. Kahn dies half way through, yet his legacy is what keeps the empire’s expansion despite, not because, his sons’ role the society he built and left them.

Genghis Khan and the Making of the Modern World is a wonderful narrative which tackles a complex subject tactfully and with great skill.

Buy Genghis Khan and the Making of the Modern World Amazon.com*
More Books by Jack Weatherford*