“Barefoot in Baghdad: A Story of Identity-My Own and What It Means to Be a Woman in Chaos” by Manal M. Omar is a memoir which the author wrote of her time working as a Non-governmental organizations called “Women for Women” in Iraq. Ms. Omar is an American woman and a devout Muslim, which gives her a unique perspective. 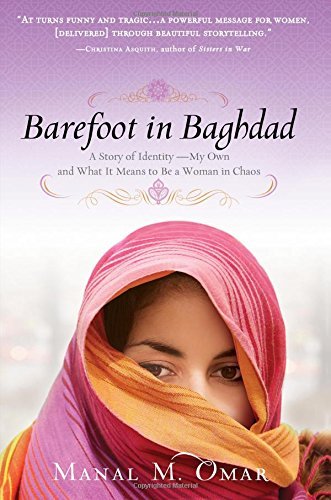 After the ordeal of getting her family’s permission to go Ms. Omar finds herself in US occupied Baghdad. At first everything seems fine, she insists on living outside the “green zone”, finds a wonderful crew awaiting her and gets support from the home office. The Iraqis are happy to get rid of Saddam Hussein and welcome the Americans as liberators.

There are many issues with the women of Iraq; foremost is society’s acceptance of abused women and the perceived shame of it. One of the women Ms. Omar met is Khanim Latif. Ms. Latif is the leader of the Asuda Organization which has established a shelter for abused Iraqi women (the author does take time to recognize other NGOs). The shelter takes in the untouchable women, those that can no-longer go home or even be associated with under penalty of death. Asuda would openly help young teenagers who have been raped, abused, accused of adultery or married young. When a government officials claims that there are no honor killings, Ms. Latif brings out of book of photographs which prove the opposite.

Ms. Latif’s is the clear voice in an choir of madness. She claims that the communities need to learn how to navigate around the sensitive topic of dishonor. “No father wants to kill his daughter”, Ms. Latif explains to the author, “Give him an excuse to maintain his honor in front of his tribe, and he will grab on to it. “

As well all know, the situation in Iraq got worst, not better. The Ms. Omar was forced to leave the country after she has done so much work, lived as one of the community and helped empower women all over. To her credit, Ms. Omar came back but was forced to leave again.

The book is strong and emotional; it grabs the reader from the beginning. Ms. Omar’s personal stories are insightful and honest, her description and understanding of the culture is superb. The author makes her points through anecdotes and does not clutter the book too much with overviews, but through individual stories of the women she helped, or tried to help.

Ms. Omar also touches on the politics in Iraq, which do as much as they can to keep women in servitude. It is as if an independent woman who is only trying to make a living is an assault on the whole culture. However, some niche professions can come out even in that society. For example Ms Omar discovered, women carpenters were in demand because a woman living alone could not invite a male carpenter over to fix furniture.

What I found distracting in “Barefoot in Baghdad” is that Ms. Omar’s political agenda which seems to hijack the book. I am no fan of the Iraqi occupation and many mistakes were made by the US when it came to keeping the peace. The author makes her position clear in the first several pages of the book, which is important for the reader to know, but then goes on relentlessly, on every other page, about the mistakes that were made, the rude soldiers, her incessant stubbornness to have nothing to do with the military, etc. The attitude seemed strange because whenever the author, as a last resort, had to turn to the military they stepped up to the challenge and helped in cases that no-one else would touch.

Zohar – Man of La Book
Dis­claimer: I got this book for free
*Ama­zon links point to an affil­i­ate account, the money is usually spent on books

Summary
Reviewer
Man of la Book
Review Date
2010-09-22
Reviewed Item
Barefoot in Baghdad: A Story of Identity-My Own and What It Means to Be a Woman in Chaos by Manal M. Omar
Author Rating
3

Barefoot in Baghdad: A Story of Identity-My Own and What It Means to Be a Woman in Chaos by Manal M. Omar