About:
“Radio Shangri-La: What I Learned in Bhutan, the Happiest Kingdom on Earth” by Lisa Napoli is a memoir starting in 2007.  The author volunteered to go to Bhutan and help launch  their first radio station.

The publisher has made available two (2) copies of “Radio Shangri-La” to be given out- enter at the end of the post. 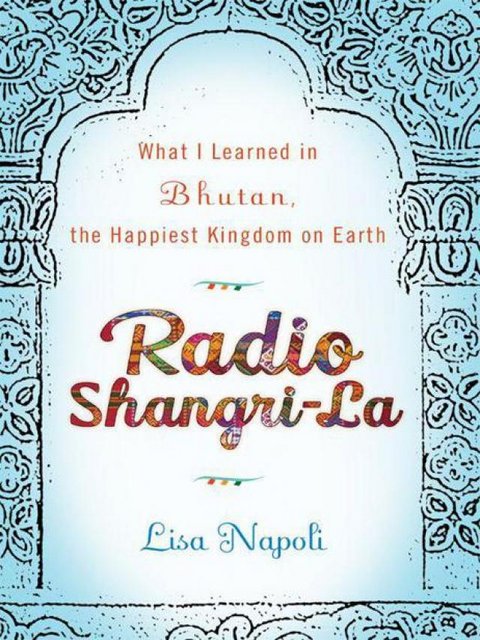 When I first started to read this book I thought “not again”.  A woman, in mid-life crisis, flies thousands of miles and changes her life forever.  I hated “Eat, Pray, Love” (book review) and didn’t want to go through pages and pages of whining again.

What I discovered, however, was the fascinating chronicle of a country moving in a breakneck speed towards change (and yes, a woman’s search for happiness – but Ms. Napoli doesn’t whine).

The book made me want to go visit Bhutan, although I doubt my beloved wife and Mr. Wallet will agree to the $200 tourist fee, charged per person, per day. Luckily for Ms. Napoli she’s given a free pass as a volunteer who has been invited to advise on a youth oriented radio station called Kuzoo FM, Bhutan’s first radio station.

Lisa Napoli describes Bhutan as a beautiful, quirky and complex country.  The country measures its success by Gross National Happiness, since “[e]conomic progress at any cost, went the thinking, was not progress at all”. Framed by the Himalayas, Bhutan markets itself as “The Happiest Kingdom on Earth”, with no traffic lights, new roads construction, penises painted on buildings for good luck and good nature people.
I almost bought a plane ticket.
But… you know… $200 per person, per day…

At the time the author has visited Bhutan was going through a massive transformation, TV and Internet has been allowed since 1999 and a clash of cultures is bound to arise.  In addition, the King has decided to hand over the country to a democratic government. Exciting and important indeed even though about a year after the elections the democratic government suspended live TV feed from their hearings (it confuses people) and gave themselves a raise and a car for their efforts.
Welcome to democracy Bhutan.

Where I find the story weak is when Ms. Napoli starts to examine an interesting personal topic and then simply drops it.  I will leave the relationship details alone (even though she does that at least twice) but she never fully examines the contradiction of helping a Bhutan establish a broadcast industry despite her aversion of the broadcast industry at home.

While Napoli’s take on Bhutan is strictly of an outside observer, I still found the window she opened to the country fascinating.  The book is a wonderful look not only at a far away place but also at how certain places and people have the innate ability to change our lives forever.

Long time journalist Lisa Napoli is in her early 40’s, without a family and unhappy at her job.  She readily agrees to a stay for six weeks in Bhutan to help a fledgling radio station called Kuzoo.

The station is staffed by a young and inexperienced group which are as much a part of the story as Ms. Napoli. We meet Ngwang who wants to come to America and becomes family to Napoli; Pema, the pop loving radio jockey and Pink, whose marriage is falling apart while she’s moonlighting as a DJ at night clubs.

Lisa Napoli’s relationship with her protégés and her experiences in a remote corner of the world are fascinating and enlightening.

BOOK BLOGGERS – Have you read “Radio Shangri-La”? If so link up your review below

Radio Shangri-La: What I Learned in Bhutan, the Happiest Kingdom on Earth by Lisa Napoli