All Quiet on the Western Front by Erich Maria Remarque is a groundbreaking book about a group of volunteer German soldiers fighting during the last weeks of World War I. Mr. Remarque was a soldier in World War I, he collected stories from his friends, many of which made it into this book. 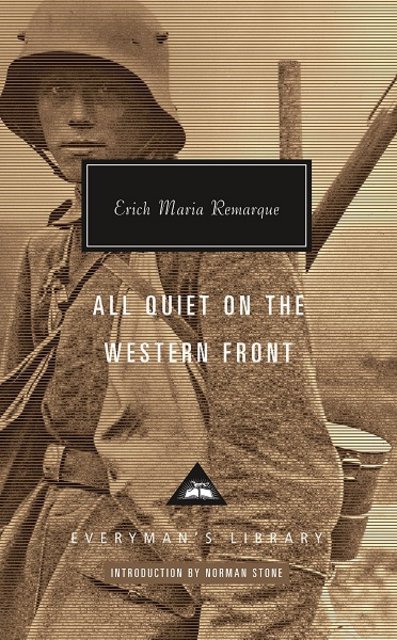 This book is in its own class, and I’m actually embarrassed I haven’t read it previously. The writing is on point, simply a man telling a story as a witness with no judgement. I didn’t realize how quotable this book is, almost every page has some sentence which is a standout.

The strength of the book is how the author captures the emotional trauma his protagonist goes through. The battles are numerous, but are nameless and insignificant. The advances which are made each day, are usually lost the next at a tremendous cost in lives.

An especially poignant part was when the protagonist, Paul Bäumer, gets some time off and goes to visit his family at home. After his experiences on the front lines he finds it impossible to relate to his family, friends, or those he knew before the war. The only person in which he finds some sort of understanding is his mother, who is dying.

Bäumer goes back to the front, happily, and continue to experience the war with his army buddies. The part of the book after Bäumer comes back to the front changes the pace as he realizes that life would never be the same, and embraces the time he has with his brothers in arms.

All Quiet on the Western Front by Erich Maria Remarque does not glamorize war, it is not a battle zone fantasy a-la 80s Hollywood action flicks. It is a sad and sober reflection on the toll war takes on individual soldiers, their families, society, and country. In fact, the Nazis hated this book so much, and the movie, that they banned it altogether.

This book deserves its status as a classic, as it lingers in one’s mind after you finish the last page and put it down. It is important to remember that this book is a novel, not a memoir, but it is striking and rings true nonetheless.

The book follows Paul Bäumer, a German soldier during World War I. The kindly Bäumer volunteered after hearing patriotic lectures from his teacher, and went to war with an open mind.  As he reaches the western front, Bäumer is joined by new and old friends. He meets an older soldier named Kat, who becomes his mentor.

Bäumer fights in many battles, suffers the dirty conditions of the war, and endures the treacherous trench warfare. When he finally gets leave, Bäumer realizes the cost of war as he no longer feels at home in his little village. After his leave, Bäumer is happy to be reunited with his unit. As the war progresses, they continue fighting and  his friends are picked off one by one.

When Kat is killed, Bäumer stops caring about living. On one day, a very peaceful one Bäumer dies. The report for that days contains one phrase: “All quiet on the Western Front”.

Buy All Quiet on the Western Front from Amazon.com*
More Books by Erich Maria Remarque*

All Quiet on the Western Front by Erich Maria Remarque