About:
Alexander Von Humboldt: How the Most Famous Scientist of the Romantic Age Found the Soul of Nature by Maren Meinhardt is a biography of this famous German scientist. Ms. Meinhardt the editor for Anthropology, German Literature, and Science at the Times Literary Supplement. 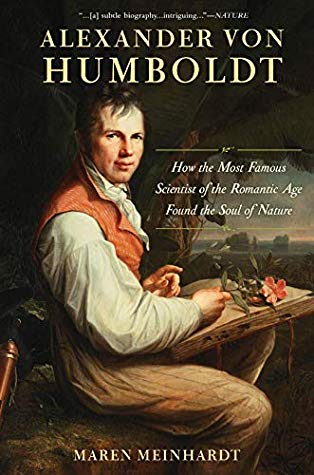 I knew next to nothing on Von Humboldt, except that the name sounded familiar. As I learned reading the first few pages of Alexander Von Humboldt: How the Most Famous Scientist of the Romantic Age Found the Soul of Nature by Maren Meinhardt it is because there are several places in the United States named after the famous man.

This is a very readable book, exposing people to the “most celebrated scientist of the 19th century”. The author starts by writing about Humboldt’s childhood in a well-to-do family, headed by a well connected father.

After the death of his mother, Humboldt was financially secured and could start on his scientific expedition, which took five years. This is where the book gets very interesting, he travels through Central and South America in the late 1700s, taking measurements, climbing mountains and studying the wild life.

I can see why the author is trying to revive the interest in this man. He is a good man, a great scientist and modern by today’s standards – something that can be said on very few people. He is not anti-Semitic, spoke out against slavery, rejected his aristocratic privileges to embrace science and encourage those who came after him.

I found this book very interesting, and well researched. I thought the author tried to stay away from being too “science-ee”, but couldn’t help herself delve into the importance of his work. Instead of making the book an introduction to the layman and spark interest in this fascinating man, we have a book which is half fascinating travel journal, and half very basic introduction to natural sciences.

Alexander Von Humboldt: How the Most Famous Scientist of the Romantic Age Found the Soul of Nature by Maren Meinhardt