A Matter of Interpretation by Elizabeth Mac Donald is a historical fiction book, taking place in the 13th  Century following Michael Scot, a scholar and translator working for Emperor Frederick II.  This is Ms. Mac Donald’s, an Irish born author, first book. 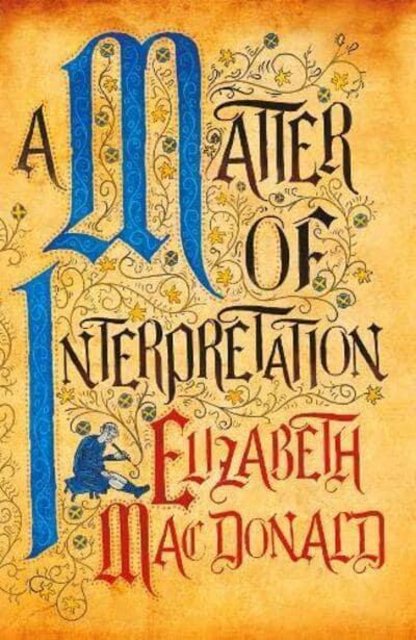 As a self-proclaimed history nerd, I usually enjoy historical fiction very much.  One can learn much from a well written, mostly accurate, historical fiction and A Matter of Interpretation by Elizabeth Mac Donald is no exception.

I’ve heard of Michael Scot in passing, but didn’t know much about him. I never realized he was as well-known as he was among intellectual circles of his lifetime. I mostly heard of Scot (The Scot) from fictional work such was Dante’s Divine Comedy where he is in the Eighth Circle of Hell with other false profits. According to his Wikipedia page, there were many not-so-kind legends about The Scot, in which magic, witches and spirits all play some part.

I was impressed by the research the author has done, rich historical details lend authenticity to the story, even when the paranormal is provoked (not very often, but just right). The narrative remains plausible and the characters seem true to their historical counterparts. The characters are fleshed out, complex people struggling with events, outside pressure, and themselves.

I was wondering about the language the author chose to use, instead of using old grammar which would either make it difficult to read or simply historically inaccurate (especially since the novel has multiple languages being spoken, none of them English), the author chose to use contemporary language and prose. This works because, told from the point of view of The Scot, the language provides familiarity, candor, openness, and honesty to the story and characters.

This novel shows The Scot attempting to reconcile heresy with knowledge, myth and truth, while keeping a balance trying to navigate the needs of Honorius III, who puts the church fist vs. the court of Frederick II, who puts the Empire first. The author manages to capture a time when Europe is turning a corner and the forces which want to hold it back, against the forces that want to charge forward.

Michael Scot, scholar, mathematician, translator, and a priest, has been asked by Emperor Frederick II to translate the works of Aristotle, and on the way discovering the writings of Avicenna and Averroes . Scot travels from Italy to Spain risking life and limb to do so.

The Pope, however, seems to think that the translations are heresy, but Scot, with the backing of the Emperor, refuses to stop.

Buy A Matter of Interpretation from Amazon.com*
More Books by Elizabeth Mac Donald*

A Matter of Interpretation by Elizabeth Mac Donald