About:
A Futile and Stupid Gesture: How Doug Kenney and National Lampoon Changed Comedy Forever by Josh Karp is a biography of Doug Kenney, a comic genius who cofounded National Lampoon before his tragic and early death.  Mr. Karp is a writer, journalist and film producer, this is his first book which won best biography at both the Independent Publisher Book Awards and Midwest Book Awards in 2006. 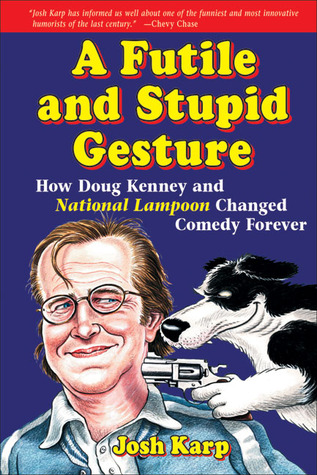 Thoughts:
Whenever anyone is asked for examples, or an introduction, to American comedy, the name National Lampoon usually makes its way into the conversation at some point. Whether it’s the magazine, or the movies (usually Animal House and Caddyshack) Doug Kenney has managed to define American humor in his image.

A Futile and Stupid Gesture: How Doug Kenney and National Lampoon Changed Comedy Forever by Josh Karp attempts, and I believe succeeded, to capture the personality and intelligence of Mr. Kenney, even though, it seems, he was not aware of  his own comedic brilliance. The book is not a love letter for Mr. Kenney, the author is unafraid about pointing out his subject’s flaws narcosis. I was surprised to read about the narrow world view that Mr. Kenney held, after all to write comedy is not easy and even, or especially, college humor needs to have a broader sense of to appeal to the few.

There is a lot of biographical information inside the book, the author makes a grand effort to use as many first hand resources as he can, which can sometimes grind the narrative to a halt with several misplaced quotes, but the effort is outstanding and appreciated. I did enjoy some of the behind the scenes stories of the magazine and the movies.

If you are interested in the history of comedy, not necessarily just National Lampoon, this books is a must. As a biography it tries to understand the puzzling personality of Doug Kenney, a complicated person which is probably laughing at us right now.

Buy A Futile and Stupid Gesture from Amazon.com*
More Books by Josh Karp*