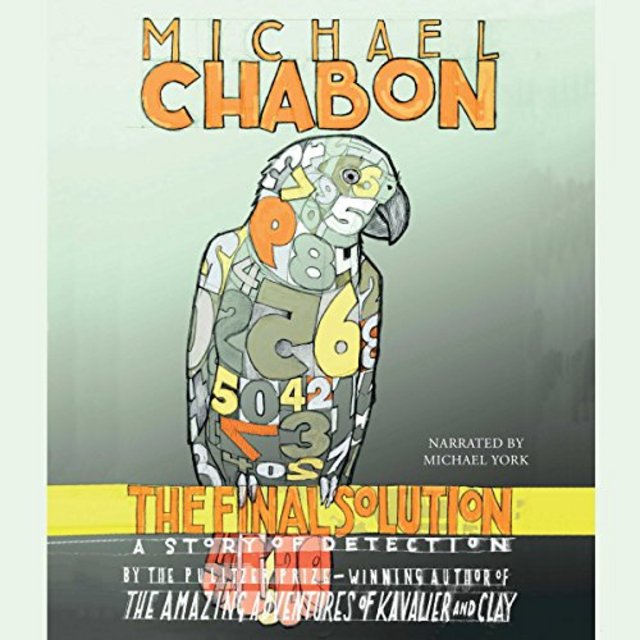 I have been a fan of the author ever since picking up the fantastic novel, The Amazing Adventures of Kavalier & Clay. I didn’t know it, but this novella is about Arthur Conan Doyle’s creation Sherlock Holmes, even though he’s never mentioned by name.

The Final Solution by Michael Chabon encompasses two mysteries, the murder of Mr. Shane, and the German numbers that Bruno, the parrot, keeps repeating.

The numbers are the real mystery of the book and could have not been ascertained in 1944 England, even by its most famous detective. The other murder mystery is just a convenient way to get the old detective involved, but it’s not difficult to solve the puzzle, even for a schmo like me.

One of the last chapters, from the point of view of Bruno the parrot, was, for me, what has elevated this book. That chapter was Chabon in his element, I only wished we would have gotten another chapter, or two.

The prose is beautiful, and I enjoyed reading the book. At times it seemed as if Mr. Chabon is trying to impress by using big words, for me, however, it worked within the spirit of the book. Unlike many other detective stories, this book attempts to capture much bigger questions about life.

Even though Holmes solves the case he has been assigned to, the haunting story of Linus Steinman is the real emotional kicker. Mr. Chabon expects the reader to do their own detective work and figure out what the numbers signify, which is not difficult.

The narration by Michael York is excellent. Clear, understandable, and paired perfectly with the writing style, as well as what I would imagine the era would sound like.

Linus Steinman is a young Jewish boy, a German refugee staying with an Anglican priest and his family. The boy has a parrot, Bruno, who constantly rattles off numbers in German. There’s much speculation about the numbers, from a secret military code to nonsense.

Another lodger, Mr. Shane of the British foreign office is found dead, and Bruno the parrot missing. Michael Bellows, the local inspector, asks for help from an old man, a beekeeper and former detective, to find Bruno and help solve the murder.

The Final Solution by Michael Chabon