The Amazing Adventures of Kavalier & Clay by Michael Chabon is one of the most remarkable works of fiction I have ever read. Even though this story is about the comic book world, there are very few comic / pop references, and none which are required to enjoy the book. This is a big plus because you don’t have to be a “fanboy” in order to enjoy this book. 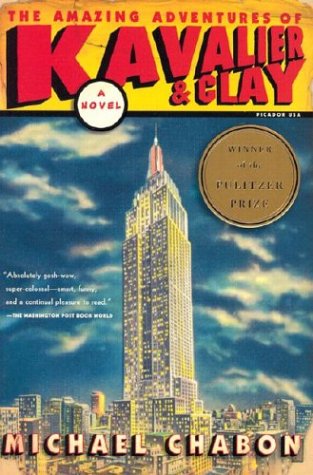 The story (which, as a fan of comics, reminds me of Superman creators Joe Schuster and Jerry Siegel) is set in the late 30’s, just as Superman is about to burst onto the world and begin the “Golden Age” of comics.

A Polish Jewish refugee, Josef Kavalier, arrives in New York to live with his cousin, Sammy Klayman. The two cousins hit it off due to their common interest in comics, escapology (which helped Joe escape the Nazis) and their fascination with the world famous Harry Houdini. The two cousins get a job at a novelty products company which is attempting to break into the comic book industry and they make it big with their character “The Escapist“, only to be exploited and get minimal monetary reward.

Joe enlists in the Navy hoping to help his family escape Nazi occupied Europe, only to live behind his pregnant girlfriend. After a self imposed exile, Joe returns only to find his cousin and his former girlfriend married and raising his child. As each one of the characters struggles with their identity, they attempt to reunite as a family as well as get back on top of the comics world.

As I said before, the book is fantastic. The characters are engaging, three dimensional and familiar. The story is tragic, funny and interesting. Michael Chabon moves the story forward in a good pace, while concentrating on interesting elements instead of the mundane.

The Amazing Adventures of Kavalier and Clay by Michael Chabon