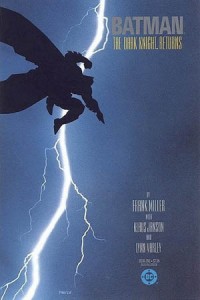 My rating for The Dark Knight Returns – 5

Thoughts:
The Dark Knight Returns by Frank Miller, a best seller and rightly so, is a story of ideologies and how they skew people’s perceptions of what is right and what is wrong. With those ideologies and perceptions comes the sense of justice and punishment no matter how they might not fit the crime. However, for me, the major point of the book was how we decide what our role in society will be.

The book is a scathing commentary on the political system at large. How boobs elected into office are being handled behind the scenes, wielding unimaginable power (nuclear warheads and Superman in this case) and how the idiotic talking heads on TV shape public opinion to fit their own agenda. 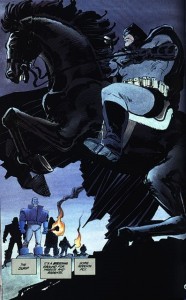 Yes, Frank Miller was, and still is, ahead of his time.

The Dark Knight Returns is a masterpiece of storytelling, an homage to the masters with love for the genre. Miller deconstructs superheroes applying layers of psychological complexity, social commentary and analyzing what makes the heroes tick. This dark book examines the psyche of a vigilante but still leaves enough of a fantasy to allow an otherwise sane man to run around dressed as a bat.

By making Bruce Wayne in his mid 50s, Miller allows the reader to fill he sense of danger and futility. The threats our hero faces are real and Miller brings maturity and complexity to the heroes which were rarely seen before this book came out.

Even though the graphic novel is filled with references to the 1980s, it still feels relevant today and even more so. The bigger picture, of bumbling politicians, unwinnable wars, domestic terrorism and economic meltdowns is actually more appropriate to today’s world as it was 30 years ago.

The book is a masterpiece of storytelling, the combination fantastic story with extraordinary panels is nothing but a work of genius. This masterful magnum opus lifted the genre to a whole new level. Even if you are not interested in comics or superheroes this is one of those influential books that comes around only once in a while.

Set in a dystopian future of Gotham City, The Dark Knight Returns opens a decade after the last sighting of Batman and the American President (which bears a striking resemblance to then President Ronald Reagan) still continues the cold war.  All superheroes have been forced out of service with the exception of Superman.

However, 55 year old Bruce Wayne becomes Batman once again to take care of an old enemy, Harvey Dent aka “Two-Face”. But Batman’s return comes with a controversy whether his style of violent vigilantism has place in a “civilized” society.

Saving the 13 year old Carrie Kelly from a Mutant attack, Batman buys himself a new fan. Carrie buys a Robin costume and searches for Batman. She finds Batman being beaten by the Mutants’ leader and saves him by pulling him into the Batmobile. 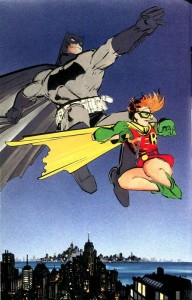 Batman has found his new Robin.

James Gordon, now close to retirement, helps the Mutants’ leader escape from jail only for Batman to beat and humiliate him which garners the desirable results of disbanding the gang. However, the new gang, “Sons of the Batman” uses violent methods to rid Gotham of its criminals.

Gotham finds itself in more trouble with psychiatrist Dr. Bartholomew Wolper, of Arkham Asylum, releases The Joker claiming he is sane. The Joker starts a media bashing trying to discredit Batman. Creating mayhem in Gotham City once again, killing many and beating Selina Kyle, is what Gotham faces. Fighting in the county fair Batman beats Joker but stops short of killing him, however The Joker twists his own neck hoping Batman will be charted with murder. The plan works and Batman becomes a hounded criminal.

Superman enters the picture, diverting a Russian warhead which detonates in the desert but creates a blackout over Gotham City. Batman, Robin and The Sons of the Batman use non-lethal force to regain order and flow of needed supplies making Gotham the safest city in America embarrassing the federal government which orders Superman to get rid of Batman. 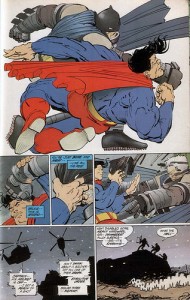 The former Green Arrow, Oliver Queen, warns Batman which allows him to prepare for the battle and defeats Superman (with the help of an arrow with a Kryptonite tip courtesy of Green Arrow). However Batman dies of a heart attack and Alfred destroys the Batcave, Wayne Manor and suffers a fatal stroke.

At the funeral, Clark Kent realizes he has been duped hearing Bruce Wayne’s heartbeat, he gives his silent approval by doing nothing except giving a knowing wink to Robin. Batman regroups his men to continue his fight – a plan which will take years.

Zohar – Man of la Book
Disclaimer: I bought this book.
This post appeared in the Book Review Blog Carnival #83.

BOOK BLOGGERS – Have you read The Dark Knight Returns? If so link up your review below: