About:
Georg Letham: Physician and Murderer by Ernst Weiss is a fictional book and a German classic. The book has been recently translated to English by Joel Rotenberg. 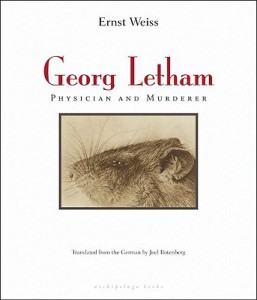 My rating for  Georg Letham: Physician and Murderer – 5

Thoughts:
I was recommended Georg Letham: Physician and Murderer by Ernst Weiss (biography), a German speaking Austrian Jew, by a fellow book blogger, Amy from The Black Sheep Dances. I have great respect for Amy and her taste is similar to mine, combine that with the fact that the book was published by Archipelago Books and that the book was praised by giants of literature, it was a no brainer.

However, I had to admit that I had trouble to get through the second quarter of the book. I even had to put it down for a bit, read another book and get back to it. I have been trying to figure out why – maybe my mind wasn’t into it, maybe it was the disquieting narrative, the prose, I had no idea why.

I could only read this book in small sections. It was interesting for 75-100 pages or so and then I simply had to put it down.
This book was disturbing.

After I finished, I didn’t sit down and write my thoughts immediately, I rarely do that anyway, but I let the novel sink in and then it donned on me – this novel is psychological horror at its best. Not the horror novels one thinks about these days, but psychological-Gothic horror which could hold its own against such masters as Poe and Kafka.

I am not a big fan of horror or gore, I’ve seen enough in the army to last me a lifetime but this kind of horror is different. The unease of revulsion and shock which accompanies the internal thoughts and conflicts of a murderous man, not a mad man mind you, but a calculating, smart person whose first and foremost thought is to benefit mankind, which, coincidentally, he doesn’t even like and acknowledges his lack of sensitivity to his fellow human beings.
If one could write a book about the internal feelings of Hitler, Mussolini, Stalin or any other man who brings nightmares to life – this would be it.

Mr. Weiss’ vision of his narrator is social critique at its best, a looking glass into the transformation of soul of a man who believes he cannot win over nature, that he is simply an experiment as are all of us humans and that we are no better than the rats he talks so much about. The author understood the concept of “herd mentality” and it’s certainly something to keep in mind this time of year when you rush through the doors of your favorite store to by some idiotic toy.

The book, while long, is actually a series of short stories with some very disturbing scenes involving dogs and mainly rats, and rats, and some more rats. The writing style which involves stories within stories, when done right, could be brilliant, however the construction of the story (not the translation) is clunky but that could be on purpose due to the skeptical and ironic relationship Georg Letham has with himself. A cold, calculating man (imagine House or Holmes without the sidekicks which keep them grounded) who convinces himself that he is in the right committing crimes using passion as his logic instead of reason and intellect for which he justifies everything else. Synopsis:
Georg Letham is unhappy in his marriage but happy in his research. When the opportunity knocks he injects his older, wealthier and well insured wife with the lethal poison Agent Y. However, as good as a physician as Georg is he botches up the cover-up. Not only does he leave the syringe in the crime scene but also confesses to his father, an official in the Austrian bureaucracy.

Letham gets sentenced to a penal colony and continues to research yellow fever being allowed to use methods he would never have been able to use in civilian life.

BOOK BLOGGERS – Have you read Georg Letham: Physician and Murderer? If so link up your review below: